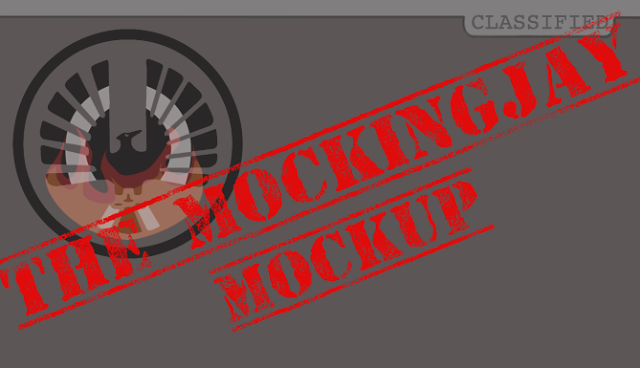 All good things must come to an end, and as we have seemed to reach the end of Mockingjay casting announcements, Mockingjay Mockup must finally conclude. This series has come from a deep and desperate love for the third book, and since we last posted (waaaaay back in February!) new information has come to light giving us more insight into the Mockingjay films. I'm talking about the most recent batch of castings: Cressida, Messalla, Paylor, Lyme, Homes, Castor, and Pollux. We already knew Annie and Boggs' casting would be announced, but we weren't sure about the rest. The above mentioned have actually been officially announced by Lionsgate, which says to us that although these are smaller roles they are important enough to be announced. It also seems that my notion of Paylor and Lyme's characters being somewhat fused together was incorrect, thank goodness. We tried thinking of ways that Lionsgate would cut plot corners, but so far there seems to be none. All these characters are being cast faithfully from what we can see. What's also interesting is the inclusion of Castor and Pollux. We are hoping that the existence of the Avoxes gets explained through Pollux, even if it is just a little. Maybe we are reading too much into these casting announcements, but it only speaks to us how faithful the Mockingjay films will be.

Our Confession
So here we are again examining Mockingjay Part 2, or at least the version we think it could be. But let's be completely honest here. We are no screenwriters, just a couple of gals who have watched too many movies, our favorites being those that play around with plot. We don't claim to be experts about it, but have taken the knowledge we do know to hypothesize what the outcome of the Mockingjay films might be. Actually, when we came down to nailing down how it will all go we realized something slightly disheartening for a series claiming to give a credible Mockingjay film model: EVERYTHING IS IMPORTANT. We wanted to keep everything in. In fact, there is hardly anything we took out in our model. Whoopsies. Could a Hunger Games fan blame us though? We feel everything needs to be established: What's happening with Peeta? How is Gale and Katniss' relationship slowly breaking down? How is the Katniss and Coin conflict progressing? What about Katniss' relationship with Finnick and Johanna? How is Prim growing up? How does Snow continue to mess with Katniss' mind? How is the rebellion coming along? How are the districts doing? There are so many story lines that are important to the story and so many that we want to see come to life. It could be that while we were attempting to academically approach breaking the story and plot down, we were in conflict with our love for the story. How does a mother choose between her children? She doesn't. For that reason, we left most of it in. We've lost so many brain cells over this subject, we figured the important decisions are going to the professionals anyway. We have followed a very simple plot structure for our predicted Mockingjay but the truth is that Mockingjay Part 1 and 2 will most likely be a structure we've not even encountered. Mockingjay is COMPLICATED. So many stories and relationships to sift through, I have no idea how Danny Strong did it. But you know what? We're pretty sure he is super qualified and it seems that he and Francis Lawrence are fans enough to know how to honor it, but maybe not so emotionally involved as we are that we can't part with a story line.

GET ON WITH IT!
Sorry got carried away there. It seems the whole reason for this post is to talk about our "delusions of grandeur" for our envisioned Part 2. Here we will talk about how we think certain scenes could go visually, and delve into more detail about Mockingjay Part 2's important final moments.

With all the drama happening in part two, we're almost at a lost as what to say. There are so many compelling moments, you could approach it a thousand different ways. First off, we'd like to see a sort of reminder of the state the country is in and/or what's happening with Snow. This subject sort of falls outside of what is in the book, and much like the Gamemaker side of things in the first film, we're curious to see what's happening on the other side. After that, the Nut seems to be an action and emotionally driven sequence.

The 'Winger Speech'
We'd love it if they played up the whole inspirational speech that Katniss gives. It's a necessary standoff between the Nut survivors and Katniss, which seems to succeed. Illustrating the moments we felt when we first read this scene for the first time and for those who have never read Mockingjay is something this film should shoot for. I know I was shocked when after what seems to be such a
successful speech, Katniss still gets shot. We want that same shock to occur in the film, which can easily be illustrated by tone (We're looking at you, James Newton Howard). Will we see the aftermath of her being shot as it happened? In the book we find out as Katniss comes to in the hospital that yes, her speech was a success among the Nut survivors despite being shot. The magic of the movies is that we get to see what happens as it happens.

Everybody Loves a Wedding
In such an emotionally charged film, you've got to have some comic relief and moments of joy. Finnick and Annie's wedding is the perfect joyous occasion for film, and if you've noticed we keep suggesting montages of simultaneous events. We like the comparison of light and dark, we can't help it! A happy occasion against a brutal one. This could be compared to Peeta's condition, or something very wrong happening in The Capitol involving Snow. Then again, this story is such a harsh one perhaps the characters and the audience deserves a break from it all. We want to see what an extravaganza District 13 has to offer, and of course we wouldn't want to miss seeing Katniss dance.

The Wish List
So what other visually compelling moments does Mockingjay Part 2 have to offer? We're drowning in them! Will we get to see the the actual Star Squad 451 propos? We sure hope so! We want to be shaken, crushed, and at the very end, uplifted. We're curious to see just how intense the race to the Capitol gets. I'm sure we won't see Boggs' legs get blown clean off due to the rating, but that's not to say it won't be horrific. We want to be terrified when they are in sewers, and…… we're dreading Finnick's death scene. It's kind of a blur in the book, much how death in war can be. Will they do it as it's written? Or will Finnick get a bigger scene since he is such an important and beloved character? We're not even sure ourselves which we'd prefer. How will Danny Strong and Francis Lawrence tie it all up in the end? We hope that they grab the terrible visuals the books has to offer to illustrate how blurred the sides of rebels and the Capitol are. We will be disappointed if the girl in the lemon coat doesn't make the cut. It is terribly horrible, but we like the slight references to Schindler's List that Suzanne Collins(whether she meant to or not) evoked in the section we labeled as the "pre-climax". All that's enough to exhaust anyone emotionally, but the viewer is nowhere near out of the woods. We have Katniss' dream sequence, her struggle to find answers, a final conversation with Snow, the Mockingjay Deal, the final climax of Coin's assassination and trial, Katniss' return home, and the epilogue. So much in the aftermath of Prim's death are incredibly compelling and realistic. We know they can't do everything, but somehow we feel as if the aftermath is the most important. The blurred lines is the possible notion that the parachutes were a plot from Coin to end the war. This is one of the most important points in Mockingjay and without it, it wouldn't be a faithful adaptation. We're just glad we don't have to decide what will end up on the cutting room floor.

Five Billion Endings
Everything Katniss has gone through and experienced has led the audience to where Katniss is after the parachutes go off. Many fans often forget that Katniss has a whole trial while she is in solitary confinement. We want to see who comes out of the woodwork to fight for Katniss' freedom, and we want to hear her sing during her solitude. We want to see Mockingjay unfold as it does in the books, and we don't want anything to be rushed after Coin's assassination. The aftermath of that plot point is extremely important to us as well. If this reminds us of anything it's (here we go again with the Lord of the Rings references) reminiscent of the "many endings" in Return of the King. 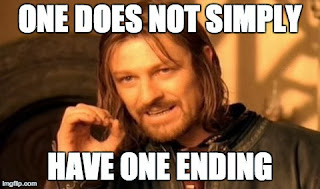 You've got the reuniting in Rivendell, the coronation, the return to the Shire, the Grey Havens, and finally Sam's wedding. We've heard lots of complaints about Return of the King's "many endings". Maybe people just don't have patience with films anymore, but we think that epic tales ought to have epic endings. So many stories have been told, and it's entirely necessary to close them up. Though, perhaps not all of them in the case of Mockingjay. Part of Mockingjay's realness is the lack of closure, but perhaps the fact that it's a film that will require a little more closure than the book for sake of the audience. We are completely fine with the multiple endings for Mockingjay as we were for Return of the King. We need to see the aftermath of the parachutes, the aftermath of Coin's assassination, Katniss' return home, and the final epilogue. 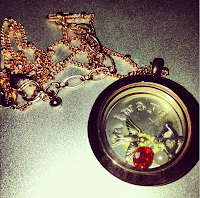 We'd like to end Mockingjay Mockup by discussing the epilogue of the franchise. Obviously, we get a look at Katniss and Peeta into their years with children. The plant book teaches them and the world what happened and to never forget those who were lost. But what about Katniss? She saves Panem from a horrible fate, but by the end she may be seen as a traitorous lunatic. It could easily seem that way, but she must be a loved figure all over the country for what she did. She was Panem's savior, the face of freedom from oppression. Insert your favorite historical parallel here, because it could easily be the inspiration for the final conclusion of Mockingjay. The final moments of the film have to be uplifting, an inspirational message. We want the seasoned readers to be reminded of the purpose of the trials and tribulations the characters go through: even in the darkest places, there is always hope.

May your bread be toasty and your arrow fly straight,
Courtney & Tiffany

* Thank you to all who have read our Mockingjay Mockup series. It's so great to read all of your comments, and we can't wait for the films! Thanks for all your support!