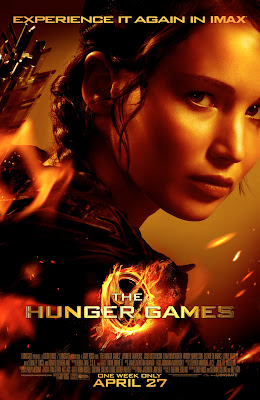 Check out the press release!!

Los Angeles, CA – April 20, 2012 – IMAX Corporation (NYSE:IMAX; TSX:IMX) and Lionsgate (NYSE: LGF) today announced that due to overwhelming demand, The Hunger Games will return to more than 100 IMAX® digital theatres across North America on April 27. The film will play for a one-week special return engagement through May 3.

The Hunger Games has grossed over $533 million globally since its launch on March 23, including $13.2 million generated from IMAX theatres in its original one week run.

“It’s wonderful that so many fans have expressed interest in seeing The Hunger Games in the immersive IMAX format, and many of these are repeat viewers,” said Lionsgate’s Motion Picture Group Co-Chair Rob Friedman, adding “ We're delighted that IMAX has been able to accommodate them through this special one week re-engagement.”

“The Hunger Games has become a cultural phenomenon and we are thrilled to provide moviegoers with another opportunity to see this year’s most successful film in IMAX,” said Greg Foster, Chairman and President of IMAX Filmed Entertainment.

The IMAX release of The Hunger Games has been digitally re-mastered into the image and sound quality of The IMAX Experience® with proprietary IMAX DMR® (Digital Re-mastering) technology. The crystal-clear images coupled with IMAX's customized theatre geometry and powerful digital audio create a unique environment that will make audiences feel as if they are in the movie.

Tickets can be purchased by visiting www.IMAX.com.


You can also enter to win tickets to an IMAX showing! Follow our Twitter and retweet this:

Woohoo #HungerGamesIMAX! Follow @wtod12 and RT this to enter to win 2 Hunger Games IMAX tickets! May the odds be ever in your favor!