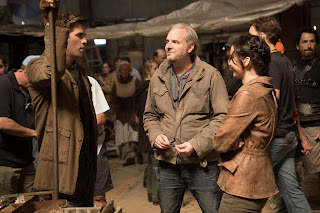 Sometime last week there were some rumblings, rumors, and speculation that Catching Fire was filming in New Jersey. On last night's HG Fireside Chat we speculated it may just be for establishing shots, but today it has been confirmed by Steven Gorelick that Jennifer Lawrence and Liam Hemsworth were there shooting in NJ's cold weather (remember, CF mostly takes place during winter).

The film crews in Ringwood last week were, in fact, there shooting “The Hunger Games” sequel, “The Hunger Games: Catching Fire” — and Katniss herself was in town.
“They filmed scenes for the beginning of the movie in Ramapo State Forest,” said Steven Gorelick, executive director of the New Jersey Motion Picture & Television Commission, who was on set during Friday’s filming.
The movie’s stars Jennifer Lawrence and Liam Hemsworth were there, according to Gorelick.

The 22-year-old Lawrence, who said Sunday at the Screen Actor’s Guild (SAG) Awards that she is battling walking pneumonia, couldn’t have enjoyed the frigid temperatures but it made for good moviemaking.
“The weather worked perfectly for them,” said Gorelick. “The water froze and there was a little snow and they got some very good footage.”


Source: NorthJersey.com via The Hob
Posted by Welcome to District 12! (Courtney) at 2:28 PM