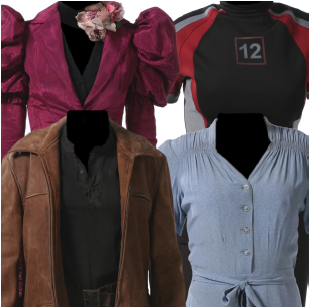 Hey Hunger Games fans in L.A.! Did you miss The Hunger Games costumes at The Hollywood Show?! Fear not, for some of the costumes will be coming to the 21st Annual Art of Motion Picture Costume Design at FIDM from February 12th to April 27th! Best of all it's FREE to the public! Here's what Blacksparrow Auctions had to say:

Interested fans of Hunger Games should most definitely go see this exhibit, which features over 100 costumes from select films of 2012, including movies from this year’s Academy Award nominees (A Royal Affair, Anna Karenina, Argo, Django Unchained, Hitchcock, Les Misérables, Lincoln, Mirror Mirror, Skyfall, Snow White and the Huntsman, etc.). This is a great exhibit that offers visitors a close-up view of the costumes.

Not only are we psyched that these costumes are being shown in L.A. again, but that they will be appearing next to other flabbergasting costume work that you've seen in the movies this year.

Did I also mention it's FREE?

Find out more about The Hunger Games costume tour
Posted by Welcome to District 12! (Courtney) at 9:05 PM