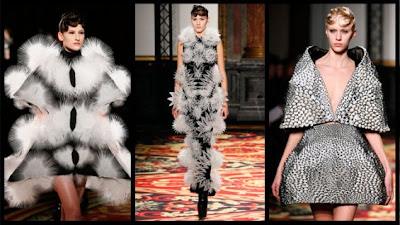 THR is reporting on a rumor that Iris van Herpen may be designing the famous Mockingjay dress for Catching Fire. Turns out she is designing ONE dress for the film, but it is unknown which one.

Could van Herpen be the designer behind the dress that bursts into fire? An inside source on the movie says van Herpen is indeed working on one costume for the film, but didn't confirm which one. After seeing her dresses made to look like splashes of water, the fiery dress does sound right up her alley.

Belgian-born Herpen, who interned with Alexander McQueen and just showed her Spring 2013 couture line in Paris on Jan. 21, is fascinated by the elements: water, air or smoke. To give you an idea of her inspirations, her past collections have been named Chemical Crows, Crystalization, Hybrid Holism, Radiation Invasion, Escapism Couture, Synesthesia and Mummification.


Interesting choice! I would have to agree that if they are bringing in a fashion designer to design a dress, it's probably the Mockingjay Dress. This brings to mind another thought, it's nice to see that they care so much about the costumes to even bring in a designer specifically for this. Things are looking good, kids.

*UPDATE* Turns out, Iris van Herpen is apparently *NOT* designing a dress for Catching Fire. According to Fashionista, she's not involved with the franchise at all. Confusing? Yes. I'm still not convinced, but I suppose it will be a while before we find out for sure what happened here.