The Francis Lawrence Interview We've Been Waiting For! 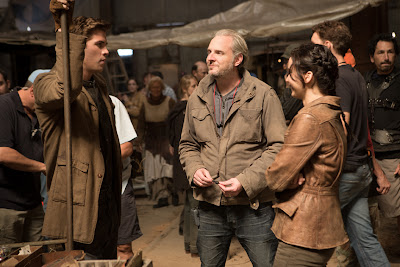 Thank you MTV news, more importantly to the ever awesome Josh Horowitz for bringing two great interviews with Francis Lawrence to the fans. Ever since we found out Francis Lawrence would be helming the rest of the films, we've needed to know at least a little information on how he is handling Catching Fire.

On taking over for Gary Ross


"I liked what Gary did a lot, but I have a different style than he does," Lawrence explained. "So it was very easy for me to come in the room and sit down with the people involved in the movie and sort of say, 'Here's what I like about what Gary did that I would latch on to and hold onto and embrace, and here's the way I would do it differently.' The trickier thing, honestly for me, was sort of stepping into a world, and there's crew members that were on the first movie, obviously an entire cast, all the people that are returning that I inherited. I was nervous about what they were going to feel... I think everybody in general was really gracious and worked really hard and ended up being really fun to work with. I think there were a couple of people that were really bummed that Gary wasn't doing it, and it had less to do with the choice of me coming on than just Gary not doing it. They signed on with Gary; they're friends with Gary; they like Gary. And I think there was definitely some sadness there."

Although we love continuity, it is nice to see a different change of pace for Catching Fire given the natural event of extreme change in the story, not to mention losing the highly debated "shaky cam".


"[Claflin] is very athletic, which is great. He's in great shape. He's very charismatic," Lawrence said. "But I was also looking in the long term. There's kind of a rouge-like quality to him in this book. And long term, he's actually an emotional character and a very loyal character and a character who's in love; a character who experienced quite a lot of sadness. And he was really able to tap into that, as well as being really charming and sexy and handsome as hell."

Bringing out the real Haymitch


Another item on Lawrence's to-do list was to sit down with actor Woody Harrelson to further refine his approach to alcoholic District 12 mentor Haymitch Abernathy. Harrelson had previously told MTV News that he had pushed for more drunkenness than Ross would allow—something which, along with Haymitch's post-traumatic stress disorder, the director and actor took a closer look at.

"One of the things that we wanted to dive into a little more... is the whole idea of PTSD, and one of the big things for [author] Suzanne[Collins] is just sort of the idea of the consequences of war as kind of one of the backbone theme of the entire series," Lawrence said. "One of the things I really like about this book is you start to see kind of why Haymitch is the way he is, why people are the way they are, so he and I did a fair amount of work in terms of that, in terms of understanding PTSD and how to work with somebody with post-traumatic stress. Also we started messing around a lot with some real humanity in Haymitch because he can be quite cynical and sarcastic at times. But I think there's a more human side to him in this one as well.

Seems to me that Francis Lawrence has a great handle on the character of Haymitch and his role in Catching Fire. PTSD is a big theme in the books, we're glad to see it being focused on.


"The arena stuff is pretty tricky... just because the sort of center of the arena where the cornucopia exists and the water and the spokes. The circular beach with the jungle around it doesn't exist, so we have to sort of piece it all together," he explained. "And you know even though shooting in Hawaii sounds like a lot of fun, it's pretty tricky when you're in the beach and waves and tides. Our set got washed away one day by the tide, and then... shooting in the jungle where there's bugs and mud and rain. The days are short, so you don't have much time, and you're starting to lug around 100-pound IMAX cameras."

Catching Fire as a Faithful Adaptation


"No, not really [when asked if there are major changes], I would say that it’s a really faithful adaptation. You know, whenever you're adapting something that’s a 12- or 14-hour read down to something that has to be around two hours, there’s going to be some cuts. We definitely made some cuts. I don’t want to go into that, but we did it with Suzanne, and I would say that it’s very, very faithful. We tried to get as much as we could in there."

Scenes Francis is Proud Of


"It's interesting because there’s a very small blur—I want to say it's a paragraph long in the book—but the moment in the arena when the gamemaker starts to spin the cornucopia, and I’m very proud of that. We designed a very cool sequence and created a spinning island, and that’s going to be very, very cool. So that’s kind of fun and very unique. I’ve never seen anything like it. It's cool.

"You know one of the very first things we shot that I like quite a lot is, there is sort of a goodbye before she goes into the arena with Liam that I like a lot. And it was actually—we shot it because we needed summer foliage and summer flowers and things like that. We actually shot it while we were in prep. Very first thing we sort of went out into the meadow, out in the mountains in north Georgia and shot this sequence over three or four hours or so, and I really like it. I think it’s really nice. Jennifer and Liam are really good in it. It’s very nice."


Really excited that the spinning of the Cornucopia hasn't gone by the wayside. However, I'm little sad that Katniss doesn't just get shoved into the train without goodbyes (which is how it is in the book, showing how punishing the Capitol is toward Katniss), but then again maybe it's for the sake of more Gale scenes.


"Nina, John, Suzanne and I have gone through the book and created the beat sheets for it. And started going through all that and at least marking our initial ideas of what the moments would be and how it all breaks down. And Danny Strong, who’s writing the first one, is working now. So yeah, we’ve actually done a fair amount of work. We're starting to think about where we could shoot it and all of that."

A little concerned that Francis mentions Danny Strong writing "the first one". Seems to me it would be much better to have the same writer for both parts? I'm going to stay hopeful and say they are focusing on the first one and going from there. But seriously, two writers for part 1 and 2 is just silly.

These interviews have given fans a lot of insight and evidence for speculation as for how Catching Fire will be faithfully adapted. Thanks to Josh Horowitz for his amazing interview questions, they are always the questions fans are burning to be answered!

Why is Catching Fire so far away?!

If you want to read the whole interview check out these two posts from MTV:
Source: MTV Interview w/ Francis Lawrence and The Bonus Material