Who's missing from the Catching Fire film? EW tells us! 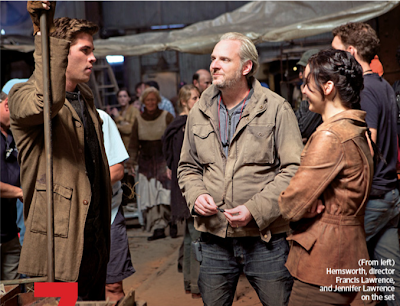 Fans of Suzanne Collins’s  words, you can rest easy. The adaptation of the Hunger Games sequel Catching Fire will be “very, very true to book,” promises new director Francis Lawrence.

This week’s cover story  describes the whirlwind few weeks that followed once director Gary Ross stepped away from the helm in April. “We were five months from when we needed to start shooting and we had no script and no director,” says producer Nina Jacobson. Once Lawrence came aboard, Jacobson put together her new director with series mastermind Collins to outline the script. Their main task, says Lawrence, was figuring out a way to best distill the novel’s dense first third, during which our hero Katniss Everdeen, home from her victory tour but tormented by the ghosts of war, struggles internally with her next move.

Lawrence says he and Collins were always in agreement about what from the book needed to be distilled, though he was coy about cuts. When asked, for instance, whether we should expect to see Bonnie and Twill — the District 8 runaways Katniss stumbles upon in the woods who first alert her to both the rebellion she inadvertently sparked and the existence of District 13 — he at first demurred. “You’ve got to wait and see,” he urged. But when it was pointed out that there is in fact no Bonnie and Twill listed on the movie’s IMDB page, he gave it up. “Ah, right,” he said with a laugh. On how the movie will now introduce District 13, Lawrence would only say that “it was fun figuring out new ways around things and new ways of doing things.” With Bonnie and Twill gone, so too is the scene of Katniss scaling a tree and then leaping over District 12′s electrified fence. And Darius, District 12′s youngest peacekeeper who intervenes during Gale’s whipping and then sentenced to the life of an Avox, is another who didn’t make the leap from page to screen.

If the loss of Darius bums you out (and it should!), know at least that the filmmakers feel your pain. “It’s as agonizing for us to lose things from the book as it is for a fan,” says producer Nina Jacobson. “I want every single thing in there. But you know what? If you have to give up something in order to give more time to Katniss and Gale or to Effie as she starts to feel a conscience, you make the sacrifices in order to serve the characters and themes that are more essential.”

Very sad, but not surprising as the Avox storyline was cut out in the first film,  and we suspected that Bonnie and Twill might get the boot.
Posted by Welcome to District 12! (Courtney) at 1:56 PM