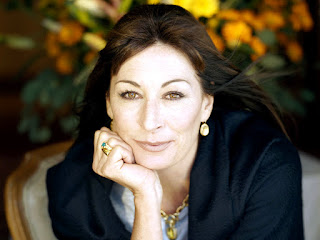 Welcome to "Campaigning for Coin"! We're looking at Alma Coin hopefuls and today we'll take a look at Anjelica Huston! As you read these posts, please comment on who your fan cast for Coin is! Of course we don't need to remind you....

Today fan sites take a look at the mysterious and spooky Anjelica Huston. Here's what we had to say:

Courtney/Tiffany: Great choice! I love these actresses that are out there doing great work, yet not extremely famous or well known. Anjelica Huston in the role of Coin scares the crap out of me, but in a good way. When put in a powerful role like that, Anjelica Huston would do very well. She's an actress known for her severe look and authoritative presence. Though known for playing Morticia Adams, she's been in the biz for years, playing all types of roles, and her most current stint on Smash just ended with the show's demise, which frees her up. She's got the look, she's got the hair, and without a doubt The Supreme Leader from Captain EO has my vote!

Down with the Capitol

Theresa: I have admittedly been a huge fan of Sigourney Weaver for the role of Coin for quite some time. That is until I saw the name Anjelica Huston in our Campaign for Coin. My most vivid memory of her on screen is admittedly 15 years old, as the wicked step mother, Rodmilla De Ghent in 'Ever After'. She was both regal and cunning, dead set on getting what she wanted at the expense of anyone, including her own daughters. Willing to do anything to gain power and respect in the kingdom. Someone who shows one face to the world, and another behind closed doors. Sound familiar? Yup, that's our Coin, and Anjelica knows how to deliver her perfectly.

Savanna: While I wouldn't be disappointed if Anjelica Huston were cast as President Coin, she's definitely not one of my top picks. Yes, she's absolutely an acting legend, and her talent is indisputable. As a big Wes Anderson fan, I especially enjoyed her performances in The Royal Tenenbaums and The Life Aquatic. And you only need to see her as the wicked stepmother in Ever After to believe her capable of portraying a manipulative, power-hungry figure like Coin. But for me, she just doesn't have the right "look." Obviously this is a completely subjective thing and a matter of personal preference. But I always envisioned Coin as someone whose physical appearance somewhat belied her true nature, and Huston has played so many "evil" roles in the past that audiences might immediately assume she's up to something. And where's the fun in that?

Amanda: Angelica Huston is my top pick for this role. To me she just has the right demeanor; she can be perfectly “wicked” and cold. I loved her in Ever After, and I think that particular movie showcases just how good she would be in this role. She didn’t care about anyone but herself, her character was all about doing everything and anything to get ahead, and make herself look good while not caring what the consequences would be. All the while keeping Drew Barrymore’s character down and keeping her from getting ahead. Sound familiar? That is why I think she would have Coin down pat. To me she is also the best physical resemblance of President Coin; she is extremely good at looking cold and evil. I think she is also the right age as well. It will be very exciting to see who does end up playing President Coin and I really hope it is Angelica Huston.

Crystal: While I love Angelica Huston, having recently seen her in 50/50, I don't think I'd be all that thrilled if she was picked as Coin. I'm old enough to remember her as Morticia Addams and it's tough to let a role like that go. Then there's Witches, which I used to watch over and over as a kid. It's hard to put into words really, but it just seems "predictable" to have someone like her cast.

Jacqui: Anjelica Huston is one of the most recognized faces in Hollywood.  She spent most of her life in front of the camera. She has had some fantastic parts including playing Lilly Dillon in The Grifters, Gretta Conroy in The Dead and  her Oscar winning performance as the vengeful girlfriend of hit man Jack Nicholson in Prizzi's Honor.  Many fans will also know her as Mortitia in three Addams Family films.  However, for me, I love her best as the awkward mistress in Woody Allen's Crimes and Misdemeanours, as the mother in The Royal Tenebaums and as Eileen Rand, the legendary Broadway producer, who will still throw a drink in someone's face if need be, in Smash. She's a real actress, with striking features.  She's statuesque and exudes a quiet confidence.  She is a woman that knows how to portray strength and menacing. While she might not be my first choice for the Mockingjay movies, I believe she would bring something special to the role of Alma Coin.

Lee: Anjelica Huston is an excellent candidate to portray President Coin.  Physically striking and emotionally powerful in her previous performances, Ms. Huston could provide an emotional depth to Coin that many other actresses wouldn’t be able to approach.  Since Coin embodies the rapacious need for power and control, Ms. Houston would no doubt deliver a performance that would enable the audience to see the resolve, calculation and power needed to make this character come alive.

Kait: Anjelica Huston's talent is undoubtable. Whenever she gives a performance, you can bet it's going to be a memorable one. We have no doubt that she'd work in the role of Alma Coin, but might she be too predictable? It's really important that Coin is not a transparently "evil" character who's up to no good. Audiences must question whether or not she is to be trusted. Depsite some great performances in other genres, people expect Anjelica Huston to be a bit of a baddie, especially with Ever After and The Witches sticking out most to people in the film's target audience. Anjelica has the air of authority about her and she looks like the type of woman who could firmly run District 13, but can she play the ambigious side of the Coin and keep everyone guessing?