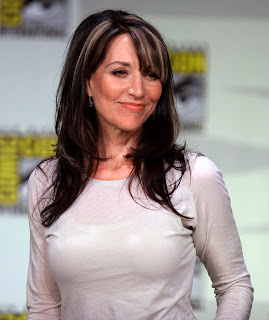 Welcome to "Campaigning for Coin"! We're looking at Alma Coin hopefuls, and today we look at Katey Sagal ! As you read these posts, please comment on who your fan cast for Coin is!
*SPOILER ALERT!*
Welcome to District 12
Courtney/Tiffany - Aside from Married with Children and "Futurama", we have seen Katey's performance on "Sons of Anarchy", a role most closely associated with Alma Coin. Gemma's character is strong but manipulative. She plays this role particularly well, but we're not too sure she is a perfect fit for Coin. She could do well, yes, but we just don't see her excelling in this role as much as some other candidates we have discussed. Also, we're having a hard time seeing her wanting to be a part of The Hunger Games since we're remembering a very opinionated tweet from her husband Kurt Sutter calling it "Twilight with evil sports".

Savanna: Unfortunately, I haven't seen Katey Sagal in anything other than Married With Children and Lost, so I don't have a very wide range of projects to pull from as I assess her "Coin potential." That being said, just knowing that she once portrayed the hilariously outrageous Peg Bundy and then went on to give such a nuanced performance as Helen Norwood makes me feel like she can probably handle anything! Although Helen's role on Lost wasn't large, Sagal made the character memorable. While I would never have thought of her as a possible Coin on my own, the more I think about it, the more I love it. It would definitely be an unexpected casting choice, which makes the idea even more appealing to me. Acting skills aside, I feel that Sagal has a wonderful look for the part as well. She has such a strong, almost regal-looking face which I can easily envision going from cool and authoritative to absolutely menacing in a heartbeat.

Lindsay: For many, Katey Sagal will only ever be Peg Bundy from Married With Children. However, she is quite a talented singer and comedic AND dramatic actress, and is often looked over for a role like this. She is not someone I'd have thought of for Coin, so I really had to consider her once she was mentioned. She's the right age and has a fantastic look for Coin. My biggest issue with her, though it seems kind of small, is her very slow speaking style. Not that she can't speak quickly. But the way her speech comes across to me is very casual and laid back. I tend to think of Coin as being quick and curt. Again, that's not something that's a dealbreaker for me, but strangely is the main reason I think it'd be an odd bit of casting.

Crystal: Sadly, I haven't seen Katey Sagal in much lately except for a few episodes of LOST, which was years ago. I've always wanted to watch Sons of Anarchy since I hear so much about her performance, but have never seen the show. I will say that I think she has a hardened look that could work well for Coin. I used to watch Married with Children and Futurama, so while it can be hard to look at her and not see ditzy Peg Bundy or one-eyed Leela, I think I could still detach her from those roles if she did a good enough job. And if she's in Sons of Anarchy, I'd say she's had lots of practice in being tough!

Kristen: Katey Sagal plays a Grade-A manipulator while simultaneously maintaining a caring, fiercely protective character archetype on the TV show Sons of Anarchy. That really surprised me, considering all I've ever seen her do prior to SOA was comedy. Don't be fooled by her stint on the sitcom Married...With Children; this woman is remarkably capable of playing a tough girl. However, if Sagal were to be cast as Coin, I worry that her acting history may lead audiences to see Alma Coin as a much less societally-threatening character than she was created to be. Sagal undoubtedly has acting chops, I just don’t want to be sitting in the movie theater watching Alma Coin on screen, but hearing Peggy Bundy in my head.

Molly: Most of you probably aren't old enough to remember Katey Sagal as the bouffant-sporting shopaholic housewife Peg Bundy in the sitcom Married With Children. And that’s GOOD because Katey Sagal is so much more than Peg Bundy, She's a remarkable woman. She's an actress and singer with a gorgeous, soulful voice who's been working in the industry forever, mostly on TV with some stage work sprinkled in. She's done a lot of comedy in the past, but her Golden Globe-winning turn as Gemma in Sons of Anarchy proves she knows how to play tough. She's the right age. She may not have been my immediate pick for Coin, but I like Katey Sagal and she’s got the talent to play the role. The biggest problem I see with casting Katey Sagal as Coin is that it doesn’t have that "wow" factor that they should be seeking for this role. Remember when we found out Donald Sutherland was cast as President Snow - “wow!” We're going to need a President Coin of equal caliber, and I’m not sure Katey fits the bill.

Amanda: To be honest, this was a tough one for our entire staff. When discussing Katey Sagal as Coin, nearly each one of us said, "Peggy Bundy?" Granted, I know she's done other things - I loved her on "8 Simple Rules," was excited about her stint on "Lost," recognized her voice in Disney's "Smart House," and am aware the she received rave reviews (and award nominations) for her role on "Sons of Anarchy", though I've never seen the show. And though I adore her as an actress, the idea of her as Coin is completely out of left field and I'm just not sure I can get on board. Has she shown the range necessary for Coin through her TV roles? Can she overcome the character she is famous for from "Married with Children," even with the right hair and makeup? Can fans look past her very recognizable voice and see her as the plain, nondescript Coin? Too many questions that I don't have the answers too, so for me, Katey isn't quite a fit for the role.

Rebekah: I know for some people Katey Sagal being fan-cast as Alma Coin
is kind of out of left field, but if you really think about it, it's
not. Katey Sagal to the laymen is best known for her work on the long
running '90s sit-com, Married With Children,
but I screamingly implore people to get passed the image you have of
her as Peggy Bundy, with her teased red hair (which was a wig), to her
gum chewing, lip smacking, feminine crossed legs that never stopped
moving, to her loud low-cut tops, and her leggings-- Katey Sagal is so
much more than Peggy Bundy. Katey Sagal has been in the entertainment
business for over 40 years, starting out as a back up singer for famous
musicians like Bob Dylan, and Bette Midler. She has an on going solo
music career herself, and she's even been interviewed and promoted on
such highly respected shows like Fresh Air on
NPR. Music is one of her main passions, but she is an actress who hasn't
stopped working seemingly for the last 30 years. She has 14 recurring
roles to her name, three of which are roles she's still in the midst of
doing, or is contracted to reprise eventually. Those roles are Gemma
Teller Morrow on the critically acclaimed FX series Sons of Anarchy,
where she plays the matriarch to a chapter of a fictionalized motor
cycle club that's meant to resemble The Hells Angels. Gemma is a force
to be reckoned with, and the role has let Katey do things that many
actresses would simply be afraid to take on in realistic, and painfully
honest ways. Gemma's no angel, for lack of a better word, but she's
someone who you can relate to, love, and hate all at the same time, so
in that sense I just described Alma Coin. Other roles she's still
contracted to portray, Nancy Abrams on Glee, aka Artie's mom, and then of course there's Turanga Leela on the long running, and much-loved animated series Futurerama.
Katey's also recognizable from her work on the ABC sit-com 8 Simple
Rules, which co-starred the late John Ritter, and the now beloved Kaley
Cuoco from The Big Bang Theory. And then there's her work on the ABC drama/thriller, Lost--
where she played John Locke's love interest. The only thing that puts
Katey Sagal out of the realistic category where it comes to being cast
as Coin is this, she's freakin' busy all the time, and it would simply
be amazing if she were cast, because it means she's has the best
scheduling skills on the face of the Earth.
Posted by Welcome to District 12! (Courtney) at 9:00 AM