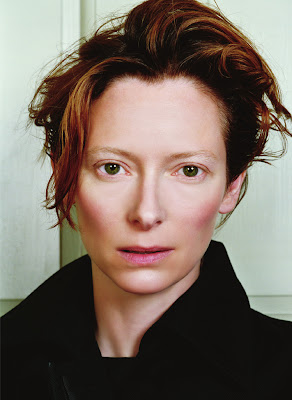 Welcome to "Campaigning for Coin"! We're looking at Alma Coin hopefuls and today we bring you Tilda Swinton! As you read these posts, please comment on who your fan cast for Coin is! Of course we don't need to remind you....
*SPOILER ALERT!*
Today fan sites take a look at Tilda Swinton. Here's what we had to say:
Welcome To District 12
Courtney/Tiffany: Courtney/Tiffany: Tilda Swinton is a top choice. Again, she often plays a position of power and her physical structure (specifically in her face) are straight edges. This goes very well with Coin's description of her hair which is very precise. Those straight lines in her face says cold and calculating, making her a great choice for Coin. Let's also not forget that she would go well with the other adult actors being an Oscar winner. We have no doubts about her acting ability, and her physical looks seals the deal. The only possible downer I could see in Tilda is that you're not supposed to suspect what kind of person Coin REALLY is. What will newcomer's opinion be of Tilda Swinton in this role? Will the audience assume she is not what she seems because Tilda Swinton is playing her? Much like the book, Coin's "alignment" should be ambiguous to the audience.

Down with the Capitol
Emily: I believe Tilda Swinton would be a brilliant casting choice for our President Coin. I am a huge Narnia fan and she wowed me with her performance as the White Witch in the franchise. It’s obvious to me that she would be able to pull off cold hearted and power hungry Coin. I have also seen her in Constantine (which Francis Lawrence directed) and thought she was great. She really has a knack for twisted, calculating characters—which Coin definitely is. In my mind, she looks the part. She’s the right age, has very unique, fierce looking features and definitely has those “eyes that could burn straight through you”. One of my biggest issues with this casting is that I want a seasoned actor, but not someone who would be too recognizable or would not be detachable from their previous roles. To me, Tilda Swinton fits the bill perfectly. My only concern is that she’s done the mega-hit book to movie franchise before and I don’t know if she’d want or need to do it again, but my fingers are crossed that Francis Lawrence is able to give her a call.
HG Fireside Chat
Adam: Tilda Swinton has always walked that tight rope between benevolent and menacing, whether it be in The Beach or -- in what was a masterful performance -- Michael Clayton. Coin embodies both of those characteristics, at first seeming to be the savior of Panem, but later, a ruthless commander with great ambition and chipped-away morals. Swinton possesses the acting chops, the look, and the complexity to deliver. She would be a mighty fine choice, capable of bringing a potent element to the Mockingjay films and, more specifically, to the ascetic stylizing of District 13.
HG Girl on Fire
Amie: If you've seen The Chronicles of Narnia then you know that Tilda Swinton has the rare and perfect ability to be insatiably evil while you can't take your eyes off her every move. She was oddly comforting to Lucy Pevensie as she welcomed her into her cold arms, while have plans that would only benefit herself while being the end of Lucy and her brothers. She was the driving force of the Narnia film, bringing the white witch to life like never before on screen. This is an important quality the actress who plays Coin must have, while she is not considered evil, she has lost the ability to have human compassion like many other victims of the Capitol Dictatorship, which causes her to have little boundaries to how she chooses to he run her regime in District 13. Tilda had a calm yet unsettling demeanor, no matter how honest she is or how much she has your back, you know there is much more where it comes from and you are a afraid of what you must do to earn such loyalty from her. I can see her every move as Coin already, and that makes me nervous, because Coin is eerily predictable, a replica of a certain Capitol leader Katniss thinks is her real enemy, and soon realizes she has been mistaken. As far as Tilda Swinton's look, her interestingly plain face and minor facial expressions remind me perfectly of Katniss's description of her as "slush that you wish would melt away". Tilda is beyond talented as an actress, and very simple like Coin. She can hide her true intentions behind her cold eyes with perfect grace, and Tilda Swinton would be my pick for our Coin for Mockingjay P1 and P2.

Mockingjay.net
Carla: I don't think there's any doubt as to why Tilda Swinton is part of this list; most people would recognize her from playing characters that are in positions of power and demand attention-- from Archangel Gabriel to the White Witch-- and out of her impressive repertoire, her antagonist roles particularly stand out to me. Even her real life traits, her appearance, facial features and tone of voice inspire one to think of a serious, highly intelligent and sofisticated mind. I have no doubt she can pull off a great President Coin if she's cast. My only doubt is: would it be too much of a good thing? Coin would do anything for power, certainly; she was a woman without scruples and we've seen Swinton play roles like that memorably. But I don't want her to seem TOO calculating, TOO manipulative. To me, Coin has to have a certain appeal to the people as well; she wasn't a good person, but she was a competent president, as far as the people of Thirteen were concerned. So in my head, Coin has to straddle the line between shady antagonist and straight-out villain, much like Donald Sutherland does as President Snow. And I think Tilda Swinton might come across as too unapproachable for that. I wouldn't mind if she's chosen, personally, because I do think she's amazingly talented, but I think there are actresses out there who would portray this duality in a much more natural manner.
My Hunger Games
Jacqui: Tilda Swinton is mesmerizing. She's fascinating. She's avante garde and I love her. I love her for her work on David Bowie's video for The Stars (are out tonight) and I love her because she slept in a box at the MoMa as part of an art installation.
Tilda is a gender bender and she plays luminious, ambiguous characters to perfection. In her career she has played the archangel Gabriel in the oddball comic book movie Constantine, the White Witch of Narnia, an Italian housewife, a woman who watches men age backward in The Curious Case of Benjamin Button while sipping tea with them, the mother of a teenage boy who commits a high school massacre and a Virginia Woolf character. She’s also the new face of Chanel, is about to star in the sci-fi thriller Snowpiercer, then follow up with a vampire romance called Only Lovers Left Alive. There's nothinig this woman can't do and she could certainly pull off a President Coin that looks like a legitimate face of the revolution, while harboring cruel intent. She would be perfect and a huge coup for the franchise.
The Hob
Lee: Tilda Swinton would make a very interesting President Coin. Her acting range is vast - playing an Archangel in Constantine, to the White Witch in the Chronicles of Narnia films, and contemporary fare such as her work in Michael Clayton - giving viewers confidence that any role she takes will be striking. Ms. Swinton becomes totally subsumed by the role she is portraying; cold, remote, and powerful. She always leverages the actors’ tools of physical and vocal attributes. Her President Coin would be frightening and riveting to watch.

Victor's Village
Rebekah: When I read Mockingjay the first time it was in the throws of needing to know what happens next above anything else, sometimes that included water, so when I was picturing the characters, like Alma Coin---all I saw was a woman with sharp features, cutting eyes, silver bobbed hair, a slender build, and a presence that screamed intelligence, cunning, and fortitude. It wasn't until the second time I read that book that I realized I was picturing Tilda Swinton, or a version of her, the whole time. So, now I can say it without any qualms, I think Tilda Swinton is ideal for the role of President Alma Coin. She's a fine actress who's made a name for herself as a character actress above the need for fame, in fact most of her work has been supporting roles, like her work in The Beach, The Deep End, Vanilla Sky, Adaptation, Young Adam (one of my favorites), Constantine, Broken Flowers, Michael Clayton, Burn After Reading, The Curious Case of Benjamin Button, the impacting independent film We Need to Talk About Kevin, and most recently the critically acclaimed Wes Anderson film, Moonrise Kingdom. She's of course most famous for her work in the blockbuster Narnia series as the White Witch, so obviously she knows how to play a quietly menacing character, but she's not the kind of actress that people will go see a film just to see her, she's an ensemble actress, the kind who thrives off the work, and the people she's collaborating with. And to me she's pleasant surprise to see when she shows up in films, even if sometimes her characters are not the most warm and fuzzy types. That's another thing about Tilda, she never picks boring parts, and she never adhere's to one genre, she's open, and she always, and I mean always delivers. Oh, and it doesn't hurt that she's already worked with Francis Lawrence on Constatine, and her schedule, according to her IMDb page, is wide open. Debra Zane, casting director extraordinaire, please hear my shouts, call Tilda's people ASAP!


Stay tuned for more Coin fan casting. Sound off in the comments who you hope to see as Coin!
Posted by Welcome to District 12! (Courtney) at 9:00 AM