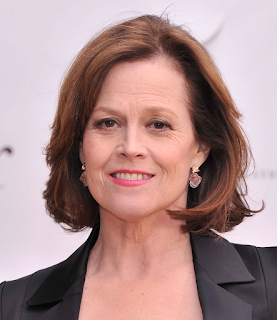 Welcome to "Campaigning for Coin"! We're looking at Alma Coin hopefuls and today we bring you fan favorite Sigourney Weaver! As you read these posts, please comment on who your fan cast for Coin is! Of course we don't need to remind you....

Today fan sites take a look at Ripley herself, Sigourney Weaver. Here's what we had to say:

Courtney/Tiffany: If a more popular actress was to be cast as Coin, we would jump for joy at the thought of Sigourney Weaver. She's played roles in many popular films every decade in the past 30 years, been apart of classic franchises (Ghostbusters, Alien) and has been nominated for an Oscar three times. Like the other fine candidates, she often plays powerful women and a voice that emits authority and power. Whenever Sigourney Weaver is on screen, she commands attention, and that is something we very much need from whoever will play Coin. There would be no doubting her command as the President of District 13. Let's not forget, she played a Hillary Clinton-esque figure in Political Animals. Aside from the fact that Sigourney Weaver is a fan favorite, she's got the voice and the look to play Coin.

Jessica: Sigourney Weaver is a versatile actress who could easily capture President Coin's power hungry, unscrupulous nature. With a wide range of roles under her belt from Alien to Galaxy Quest to The Village, Weaver creates characters who are powerful and commanding even if they are not in an actual position of power. I can easily see her ordering torturings or using her troops like game pieces. She also has the depth to portray Coin's conviction and mass appeal to the residents of District 13, who liked and respected her enough to make her President in the first place.

Kristen: What is there to say about Sigourney Weaver, other than she is the face of an entire generation of cult classics? I’m not going to talk about her portrayal of the supercool scientist/ET killer Ellen Ripley of the ridiculously successful Alien franchise. I’m not even going to talk about Dana Barrette and the infamous “There is no Dana, only Zuul” line from Ghostbusters. I’d just like to call your attention to 1997’s awesome retelling of a classic fairytale—Snow White: A Tale of Terror. Sigourney Weaver rendered the single most bad-ass interpretation of the Evil Queen/ Poison-apple-toting old hag EVER. (That’s right, I said EVER, Charlize Theron…) More than portraying a seriously vain, jealously deranged, power-starved wicked step mother, Sigourney brought an almost sympathetic note to the role as a grieving mother who never could get past the death of her son. Her heart was kind of in the right place at least for a while. And that’s exactly why Sigourney has my vote for President Coin. She is fully capable of playing a dastardly and manipulative character, while at the same time maintaining a certain je ne sais quoi about her. In the books we’re lead to believe that—unlike President Snow—Coin is the Head Honcho of District 13 because the people chose her to be, which is to say, she must have been likeable enough to get elected. If the writers/producers/directors want to portray a tough-as-nails, yet relatable President Coin, Sigourney Weaver would be the hands-down choice in my opinion.

Amanda: I do think that Sigourney Weaver would make a fabulous President Coin. My only hesitation is that, given her record of mostly science fiction, especially Alien, I worry that I might spend the entire time picturing President Coin fighting off aliens, which is unfortunate because, as I said, I really do think she would be great in the role. She is an extremely talented actress, and I think she can definitely handle the meaner, colder persona needed for Coin, and she more closely physically resembles how I pictured Coin. I think she is closer age-wise too.  Sigourney Weaver is in my top two picks for this role. I would not be unhappy at all if she were to play President Coin.

Adam: There's a reason Sigourney Weaver tops the mountain of many President Coin lists: She represents female empowerment better than perhaps any other actress out there. She has earned that reputation through dominant roles in Alien, or even Avatar, but there was a reason she was selected for those roles -- she possesses a transformative acting talent. President Coin may be a villain in many eyes, but that doesn't make her a weak character. Coin is ambitious and ruthless, and extremely cunning in her attempt to achieve supremacy over Panem. Weaver could seamlessly fit into that role, applying those badass heroine characteristics she's so famous for to more sinister aims. For Coin, Weaver is as good as it gets.

Down with the Capitol

Ellie: Most famous for battling aliens and, more recently, battling with aliens, we know Weaver can play a strong, intense female character. She has that stern superiority about her that must be present in any President Coin. She could bring out Coin’s relentlessness beautifully, as well as her weaker, more fearful moments. Her height, alone, could give Coin an overpowering dimension that could cause fear in the viewers. She would be wonderful choice for Coin, who would bring even more talent to an extremely talented cast.

Kait: Sigourney Weaver is one of the most classic ass-kickers in Hollywood. She's battled aliens, injustice, armies invading Pandora, and Zuul! Yet I have no idea what she'd do with a cruelly ambiguous character like President Coin because I haven't seen her taken on a role like that (though I'm told Political Animals is a great example.) Sigourney is usually the hero or the mockingly evil character, though in all the movies she displays a great sense of authority. But it's possible that she's also TOO much of a sci-fi favorite to really convince audiences she is Alma Coin, not just Sigourney Weaver playing Alma Coin. Overall, she's not my top pick, but I wouldn't be unhappy if she were cast in the film!

Ciara: For cinema historians everywhere, Sigourney Weaver is the only choice for President Coin. Katniss has raised her bow at a time in film, particularly in 2012, when we saw more heroine-headlining blockbusters than any other year previous. Casting Weaver as Coin would be a nice thank you to the very first female action icon and to the makers of 'Alien' who, in 1979, simply switched Ripley from a man to a woman. It would be a fitting passing of the torch to the most exciting heroine of cinema today. But this isn't like casting her in just another cameo performance to reference her title as the queen of sci-fi and horror ('Paul,' 'Cabin in the Woods'). President Coin is much more important than that. Sigourney Weaver is a truly wonderful actress. We know she can play cold and calculating extremely well but she can do it with much more subtlety and complexity than many other actresses of her generation from 'Gorillas in the Mist' to more recently in 'Rampart.' And that's what is needed for Coin. She's most certainly not an evil character. But she's not a good one. She's human. Mockingjay is all about the failings of humanity and the cost of war and Weaver would give the honest and credible performance that the character of Coin deserves. If that wasn't enough she would be an incredible adversary to Donald Sutherland's Snow, both characters being like different sides of the same *ahem* coin. And lastly, she should sign on to Mockingjay because the fact that Donald Sutherland and Sigourney Weaver haven't been in the same movie together is a crime against celluloid!