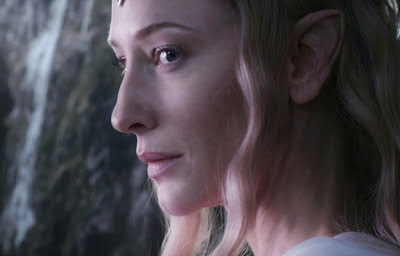 Welcome to "Campaigning for Coin"! The fan sites have been examine Coin possibilities the past few weeks and today we take a look at Cate Blanchett! As you read these posts, please comment on who your fan cast for Coin is!
*SPOILER ALERT!*

Courtney - Cate Blanchett is my number one pick for Coin, guys. Not only is she a superb actress, but has had experience playing women in power. Elizabeth: The Golden Age earned Blanchett an Academy Award nominee and her portrayal Galadriel has won over the hearts of Tolkien nerds everywhere. Talk about playing a women in power! Galadriel is so ancient, she's probably the only elf left alive in Middle Earth during the War of the Ring who has seen the Light of Valinor with her own eyes. All I'm getting at here is that Cate Blanchett is great at playing a women in power and playing it straight, whether her intentions are good or bad. She is also striking in the same way we gave a super thumbs up to Tilda Swinton. Cate Blanchett has the look I want for Coin, and it doubly helps she's got the experience.

Adam: Cate Blanchett has achieved as much as she could ever hope for as a thespian, which leaves her in a rather enviable spot: She can pick and choose which roles she wants. The question becomes, then, whether she wants to be part of the Hunger Games franchise, because it would be difficult to imagine Nina Jacobson, Francis Lawrence and company ever saying no to such a revered, accomplished actress. Perhaps her most comparable role to date was her turn as Marissa Wiegler in Hanna -- a vicious, calculating character with ruthless ambitions, yet also with tiny doses of empathy that come and go with the breeze. She has proven adept at being charismatic and stoic (Galadriel in LOTR, for instance), and with Mockingjay spaced out into two films, she would have plenty of screen time to enhance the book version of President Coin. Cate Blanchett is capable of playing anyone, and anyone would be lucky to have her, so if a match is desired, nothing but greatness would ensue.

Amie: Cate Blanchet is no stranger to science fiction and fantasy films, having played the beautiful Galadriel in Lord of the Rings. However to see exactly why miss Blanchet would be a perfect Coin, you must see her as Queen Elizabeth in the Elizabeth films. She brings a nation into it's golden age, and is praised among her people. Her strength and solidarity in this role is stunning. Yet she is vulnerable, and afraid, and, when in the private of her room or few trusted friends, she will break down. We don't have any moments in Mockingjay where we get to see Coin's breakdowns and weaknesses, but we know they are there, and these are elemets that must be in the film. Coin is a layered character; Cate is a layered actress. Don't let her beauty fool you, and she is gorgeous. I met her in person at a premiere and couldn't stop staring. She is flawless. This is another incredible thing, with how beautiful she is, her talent as an actress can make you think her to look plain and frumpy if she wants you to see her this way. If Cate were Coin, she would be an asset to a talented and seasoned cast, and I would be jumping for joy.

Tash: Some illustrious actresses have already been discussed through the Campaigning for Coin series and Cate Blanchett is another. Of course being Australian I am going to be biased, but Blanchett's achievements are remarkable and her filmography speaks for itself. Perhaps best known to many for her role as Galadriel in the 'Lord of the Rings', Blanchett is also one of a handful to have been nominated for both a Supporting and Best Actress Academy Award in the same year. We're also talking about the woman who has portrayed Queen Elizabeth I, Katharine Hepburn and Bob Dylan (!) on screen. I think Blanchett would make a really interesting Coin and bring the multiple layers of Coin's personality to screen really well. She can exude charisma and confidence when she needs to and I always imagined Coin as a woman who knew exactly how to manipulate the situation in her favour without making waves and making her intentions obvious. The audience needs to be slow to work this out like Katniss was and I think Blanchett would be perfect at throwing the audience off the scent by creeping up on us slowly. Another thing I find important about the role of Coin is that ultimately her tale was rather tragic as well, on some level you do sympathise with her despite her actions. I can see Blanchett perfectly portraying the subtle malice, fierce determination, ambition, fear and cunning that Coin possesses and would love to see her in the role.

Kristen: Cate Blanchett...What comes to mind for me is her role as Marissa in the film Hanna. She had an objective and was ruthless when it came to attaining her goal. Of course, prior to that she made an absolutely brilliant head of state in her role as Queen Elizabeth I. That being said, she could definitely work as President Coin. The only real issue I have with Cate is that she's much younger than I had pictured Coin to be.
The Hob

Megan: Hands down Cate Blanchett is one of my favorite actresses. She just has a way about her that has "Classic Hollywood Icon" (as well as fashion icon) written all over it. She is graceful and so stunning. The list of films she's been apart of goes on for miles. Cate has been nominated a total of 5 times for an Academy Award for her roles in Elizabeth, Notes on a Scandal, Elizabeth: The Golden Age, I'm Not There and The Aviator (which did win her an Oscar for Best Supporting Role). Cate also portrayed Galadriel in the "Lord of the Rings" series, which is at the top of my all time favorite flicks list. She was brilliant in the film! I honestly believe Cate could take on any role given to her. If she were cast as Coin she'd nail it. She would be an amazing addition to the Hunger Games cast, but with all of that said she is not my first choice. Her looks are a bit too youthful (which could be changed) and to me President Coin should be played by someone a bit older or lesser known. There are several others who cross my mind for Coin and she's not one that particularly stands out.

Tiffany: As a huge Lord of the Rings fan, I can't help but be excited by the thought of Cate Blanchett as President Coin. She has played rulers before, from Elf Queen Galadriel to one of the greatest rulers in history Queen Elizabeth I. She has an expansive filmography with a wide range of roles, so I have no doubt she could pull of Alma Coin. I think she could play cold, calculating President Coin very well. She has a face that can go from warm and friendly to harsh and vengeful in an instant. My only hesitance is, does she need another high profile role in a book-to-movie franchise?
Posted by Welcome to District 12! (Courtney) at 9:00 AM