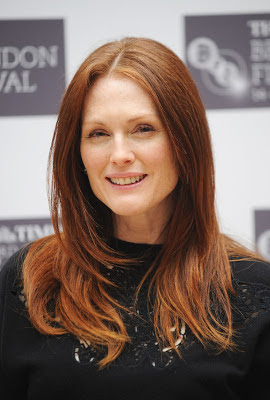 Welcome to "Campaigning for Coin"! Today's discussion is about Julianne Moore! As you read these posts, please comment on who your fan cast for Coin is!
*SPOILER ALERT!*
Welcome to District 12
Courtney/Tiffany: We are in agreement that Julianne Moore is one of our favorite actresses. She's a solid actress and has had a very diverse career. I mean, she has Maude Lebowski, Clarice Starling and Sarah Palin on her resume, to name a few. Sarah Palin is a perfect example of a role that Julianne already has under her belt and could be very helpful to her playing Coin. However, we do think that her look isn't as cold and calculating as we imagine President Coin to be. But then again, that can work in her favor because who is to suspect ulterior motives from someone like Julianne Moore? A plus for her is that she has worked with Josh Hutcherson before, playing his mother in The Kids Are All Right. Last but not least she seems to be a fan favorite among THG fans, so that's a super bonus too!

Down With The Capitol

Aldrin: Now, I've seen Julianne Moore's acting and it's clear she knows what she's doing. I can go on and on about how I loved her in Nine Months or The Kids Are All Right (also starring Josh Hutcherson), but let's look at something very obvious that proves she's good for Coin: she played Sarah Palin in Game Change. Trying not to sound too political here, but Sarah Palin was someone who was given lots of power, some might say more than she should have had. Some supported her, some hated her. Sound familiar? Granted, Palin and Coin are two entirely different people in so many ways, but the general principle applies. Julianne Moore has experience playing a woman in power, who had to put on a tough exterior despite the fact that many disagreed with her actions. Combine that with her impeccable acting skills in so many other roels, and I think you've got someone who could play Coin perfectly.

Adam: Julianne Moore may not be quite as vicious and belligerent as some of the other candidates, but she certainly can act. In my view, she would excel at portraying the softer side of Coin, which could be extremely effective in fooling the populace -- then, when she proves to be much worse, it will be as shocking as it was for Panem's citizens. Moore is famous recently for The Kids Are All Right and Game Change, but I see a parallel with her role as a blood-to-the-bone revolutionary in Children of Men. There, she was good, but she had some of the same character traits as Coin, and she proved plenty competent in handling them. Moore would not be my top top choice, but I would still be fine with her selection.

Lindsay: I am a fan of Julianne Moore and I think she is a stellar actress. She has impressive range, and when I think of her, I think of both her big laughs, and her sad/angry expressions, all at once. Her previous characters that stick in my brain are from The Kids Are Alright, and her stint on 30 Rock (with that wicked awful Boston accent!). But for some reason she doesn't jump out at me for Coin. While I think she could play the role with her hands tied behind her back (well, not really, obviously), I just almost feel like I have NO opinion about her. Which makes me think I don't like her for the role. Would I be disappointed if she were cast? No way! She's a superstar and has the Emmy Award and numerous Oscar nominations to prove it. But she's not my first choice.

Jacqui: I am a big fan of Julianne Moore. She is quite a few of my favorite movies, including the Big Lebowski, The Hours, Far From Heaven and The Kids are All Right. Her perfomances are nuanced and compelling. She is one of those actresses that can balance drama and comedy with great effect; she can come across as completely empathetic, but also mysterious and remote. Her career is a mix of diverse and interesting roles and she's definitely one of those onscreen people that you can't take your eyes off. I think she would definitely bring something special to the role of Alma Coin.

Molly Amberson - I admit Julianne Moore never crossed my mind as an option for Coin, but now that I’ve had it swirling around in my head for a while I’m starting to love the idea.She’s an amazingly versatile character actress, she’s the perfect age, and can’t you imagine her rocking a razor sharp grey wig? I can certainly see her as the icy Coin with her fair skin and (cue the contact lenses) grey, pale eyes the color of slush “you wish would melt away.” It could also be one great big reunion - She’s worked with Josh Hutcherson in The Kids Are All Right, Woody Harrelson in Game Change, and Philip Seymour Hoffman in The Big Lebowski, Boogie Nights, and Magnolia. And her upcoming film Seventh Son ALMOST had her working with both Jennifer Lawrence (she bowed out) and Sam Claflin (he auditioned for the lead).

Lee: Julianne Moore is one of the more interesting choices to play President Coin. Her work is so diverse, it's a challenge to view any single performance and point to determine her ability to play Coin. The characters she has portrayed have a level of intensity and her performances always exude tremendous energy. Many of the roles have been determined women, focused and willing to take risks to succeed. These are all qualities that President Coin has. Always a chameleon in her roles, Ms. Moore would be visually striking with snow-white hair, sparkling eyes, and a sense of invincibility in her portrayal.

Rebekah: If you follow my writing on Victor's Village at all, you should know by now that Julianne Moore is one of a handful of actresses I've already written up about as a potential Alma Coin. Face it, Julianne is no slouch where it comes to acting talent, she has one of the more diverse, and critically embraced careers of an A-list who's still regularly working actress out there. From her work in films like Benny & Joon, Short Cuts, Boogie Nights, The Big Lebowski, A Map of the World, The End of the Affair, Magnolia, Far from Heaven, The Hours, The Children of Men, A Single Man, The Kids Are All Right, Game Change, and the recently released What Maisie Knew, she's proven herself as someone who 100 times over is capable of portraying every single kind of woman you can even remotely imagine. This woman is not afraid to take on even the most weird, the most despicable, the most shallow, and the most intense, and the most sad types of people. She's an actors actor, and the thought of her taking on a role like Alma Coin gives me giddy shivers down my spine, because I know she would sink her teeth into Alma's character like a juicy steak, and chew it slowly, precisely, and oddly beautifully. I've seen comments that some of the choices in this on going fan-casting series are too predictable, well-- Julianne Moore has never taken on a predictable project in her entire career. She does big budget films like The Lost World: Jurassic Park, Evolution with David Duchovny, and tiny art house films like Chicago Cab, and Savage Grace with Eddie Redmayne, and then mixes it up by taking a recurring role on 30 Rock opposite Alec Baldwin. No one, and I mean no one can say that Julianne Moore being cast as Alma Coin is predictable. This is why she's one of my top choices for Alma Coin, and also because I really really want to see her go head to head with Jennifer Lawrence.
Posted by Welcome to District 12! (Courtney) at 9:00 AM