Check Out One of the Capitol Wigs From The Film! 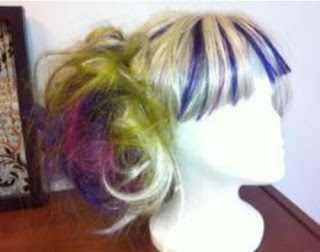 This is just TOO COOL. This image showed up on ModernSalon.com along with some tidbits about the natures and challenges of coming up with these looks for the Capitol citizens:

In vivid contrast to the mousy hue of Katniss, the citizens of the Capitol were described to Petenbrink as “sophisticated, couture and edgy.” Collaborating with Costume Designer Judianna Makovsky and Hair Department Head Linda Flowers, she was challenged to create unique color designs for each of the 500 extras, using brights and pastels.

“When you work with these colors, it’s a challenge to make them look trendsetting and visionary and not clown-like,” Cherry says. Once again, Joico offered the solution with the pure, vivid clear tones of products like Vero K-PAK Color Intensity. As a result, Petenbrink predicts that several of the color designs will strongly influence trends once the film opens.

Source via Hunger Games Examiner
Posted by Welcome to District 12! (Courtney) at 10:43 AM