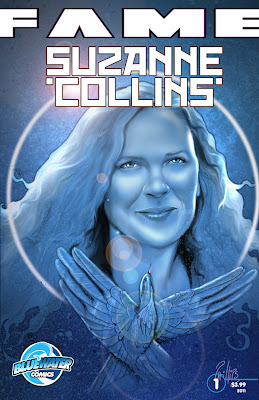 Hunger Games Examiner Sara Gundell is the author of a new comic about Suzanne Collins' life! Check out the press release and how to preorder below!

Just in time for the March 23rd theatrical debut of “The Hunger Games” movie, Bluewater Comics is excited to release “FAME: Suzanne Collins,” a bio-comic about the best-selling author of the books that inspired the film.

Coming in late February, “FAME: Suzanne Collins” offers fans a unique look at the life of their beloved author, and what inspired her best-selling young adult book series, “The Hunger Games.” It chronicles her life, including important moments in her childhood, her early career in children’s television, and her transition to the world of young adult literature.

It seems only fitting that Collins is the subject of Bluewater’s latest bio-comic, as she joins the ranks of other authors previously featured in Bluewater titles, such as J.K. Rowling and Stephenie Meyer.

“With the movie coming out, this is the perfect time for fans to discover what inspired Suzanne Collins to write ‘The Hunger Games,’” said Sara Gundell, the writer of “FAME: Suzanne Collins.” Gundell runs the young adult literature website Novel Novice, and writes exclusively about “The Hunger Games” series for Examiner.com. She has also contributed her “Hunger Games” knowledge to MTV, Movies.com, and other media outlets.

“FAME: Suzanne Collins” features original cover artwork by Joe Phillips, whose credits include work for DC Comics, and is illustrated by Mimei Sakamoto, an acclaimed Manga artist whose other Bluewater credits include “Infamous: Lindsay Lohan.”

You can pre-order “FAME: Suzanne Collins” on Amazon now: http://amzn.to/pbVjMF

Or to find a comic shop near you, visit Comicshoplocator.com