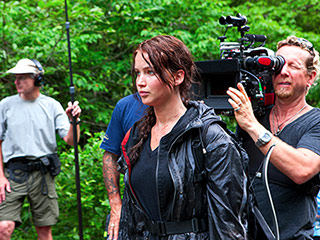 
With less than two months to go before the March 23 premiere ofThe Hunger Games, the first installment of Suzanne Collins’ breathlessly addicting Mockingjay trilogy, director Gary Ross is already predicting the possibility of another nomination for his 21-year-old star Jennifer Lawrence come next year’s Oscars. “The range in this performance, the emotional terrain that she investigates, the demands of what this role are,” he raves of Lawrence’s portrayal of series heroine Katniss Everdeen, a 16-year-old forced alongside other children into a televised fight-to-the-death. “It’s such an intensely physical role and an emotional one. She carries the entire movie. To be able to do that at that age is so kind of incredible that I was in a little bit of awe. Do I think she should be nominated? Absolutely.”

Ross and Lawrence bonded hard on the 83-day shoot, weathering the sweltering North Carolina heat and afternoon storms together. “We were all a family,” says Lawrence. “Everything that I love about the movie, and everything that got me to say yes to this movie, was Gary.” On set, however, she says Ross liked to float the possibility of him leaving everyone in the hands of a new director. “He wanted me to worry about it, because he enjoys my anxiety,” she says with a laugh. “That was a huge, huge thing that he used to lure over my head. Like a bastard!” Lawrence says that because of the tremendous rapport enjoyed by the cast and crew, she always assumed Ross would sign on again for Catching Fire, but it was still a hand-wringer. “I still don’t know for sure,” she says. “Is he definitely doing it?” she asks EW.

Ross, while attached to direct the next installment, still hasn’t officially confirmed his involvement. But he did share with EW his love for the material that most likely awaits him.SPOILER ALERT! SPOILER ALERT! “I love the title Catching Fire because from the moment Katniss was willing to eat the berries,” he says, “the moment she was willing to give her life for something larger than herself, she set off a chain reaction that was at once bigger than her and also because of her. That’s a very exciting movie to make because you’re seeing the emergence of a leader. It’s the birth of a revolution so it has context that’s larger than just the Games themselves.”

There’s a risk when signing onto a franchise, especially one as beloved and anticipated asThe Hunger Games, that the weight of an iconic role will leave the star herself feeling crushed. Lawrence herself sounds surprised herself by how ready she is to shoulder Katniss’ burdens once more. “Signing onto the movies I was like, ‘Well, I’ll probably love the first one and then I’ll just want to get the rest of them out of the way,’” she says. “But I can’t wait to start training. As soon as they were like ‘We need to start training in July,’ I was like ‘Woohoo!’ I can’t wait to get back.” She pauses to laugh. “Though I don’t know if that’s because I think we might shoot in Hawaii.” The tropical location would make sense, as much of Catching Fire‘s pivotal action takes place on a Capitol-constructed beach. Just yet another reason for Lawrence to look forward to the shoot.

From the Fandango interview with Gary Ross from earlier, he confirmed that he's signed onto work on Catching Fire whoo!
Posted by Tiffany at 1:50 PM