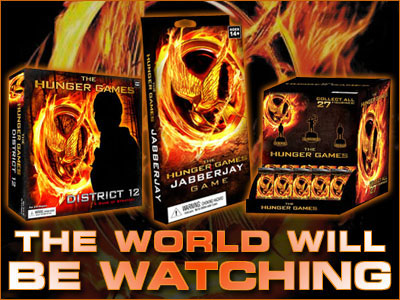 We've got news on Hunger Games figures and games announced today! From GameSalute:

The Hunger Games District 12 Strategy Game will highlight storyline from the movie. Players will attempt to gather food, clothing, medicine, and more in efforts to avoid The Reaping.

The Hunger Games Jabberjay Card Game is a game of secrets and deduction. Players represent a District or Capitol Citizen, each hiding their identity from their opponents. Their goal is to discover everyone else’s identity, and send them fleeing from the game. Players can also choose to work together to protect one another from the Peacekeepers.The Hunger Games begin this March, 2012. Will you be watching?

What do you guys think? Will you be buying any of these products when they come out?
Posted by Tiffany at 11:36 AM