This was it! Our very first opportunity to catch a glimpse or possibly even meet our favorite Hunger Games people, Jennifer Lawrence, Josh Hutcherson and Liam Hemsworth. More importantly, propose to Jennifer Lawrence that we be best friends. 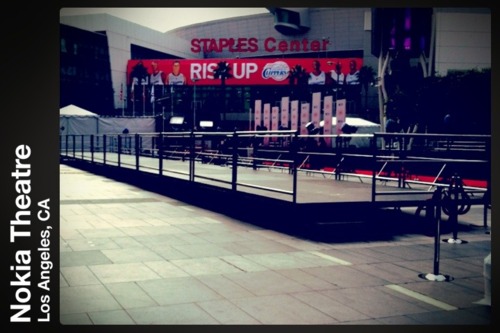 Tiffany, Denise, and I showed up armed with our silly sign to attract attention and relieved that we were probably the only people there. We hung around for a few hours, and after a few frustrating conversations with security, finally figured out where the public was supposed to stand, which was right across the street from where the limos were to drop celebrities off. 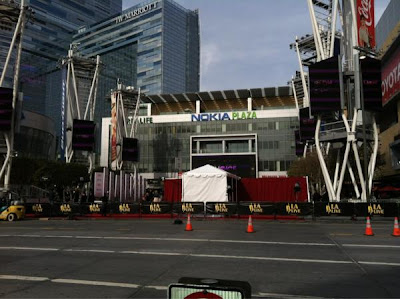 At this point we were feeling good about our spot. Rumor was that people were gonna show around 3, but that didn't happen until much later. In the meantime we chatted about Hunger Games with people who had and hadn't read the books, thanked people who gave us compliments on our Hunger Games shirts, and our bestie even made our stakeout spot a foursquare check in.

At about 4:30, the limos started showing up! From here on, it was pure excitement, my heart almost could not contain it. Who was in this next limo? What if it's Jennifer? What will I say? So much anxiety was had between the three of us. I will say that there is one time I completely lost my composure and that was seeing Ewan McGregor waving happily in my direction. I believe I ended up blurting out something about how much I loved him because I was deeply in love with him in high school, and I swore to myself if I ever saw him I would speak of his awesomeness. All that came out was a bunch of words.  Oh well, so much for composure. Here's our account of our experiences with Jen, Josh, and Liam:

Josh: A shorter guy put on his jacket, but his back was to us. It was night at this point, and while staring into the bright lights, it became harder and harder for us to decipher who people were. I was pretty sure it was Josh, but a little afraid to call out to him. "JOSH!" I yelled. But he didn't turn around (most of the celebs turned around when you called their name). When I finally saw his profile, we continued to call his name because I was sure it was him. But nothing. A few minutes later we got confirmation it was him since every celeb that came onto the red carpet was announced. Disappointment. Out of all the celebrities in the world, he seems like the one who would turn around and wave. Maybe he didn't hear us, I don't know. I still wonder if he would have turned around had I addressed him as Peeta...

Liam: Oh, he was THE BEST. THE BEST! When we figured out it was him, it was hard to yell over everyone yelling for Miley. We yelled, "LIAM! LIAM!" and no acknowledgement. Well, I wasn't gonna have this happen twice. I had no other option, so I leaned over the barricade and yelled "GALE!!" as loud as I could. Just as he was about to vanish from sight, he turned in our direction and gave us a wave. It was a small wave, but it really meant a lot!!

Jennifer: Oh, Jennifer. How sneaky you are. Granted about half of the celebrities that were there did not arrive in the limo convoy. So she probably just walked around the building into the red carpet on the side where the quieter entrance was. The crew was just starting breaking down the red carpet when Denise said, "Who's that girl with the swishy pony tail? In the blue dress. Is that her? I bet you that's her." To which I tried locating said girl, but she had gone by that point. Her suspicions were confirmed when we located the released photo of what Jennifer Lawrence was wearing, precisely what Denise saw! So the night wasn't completely lost, we got a wave from Liam AND Denise managed to spot Jennifer!

We can't wait until the next time we can do this all over again!

Check out the other stars we were able to see under the cut!