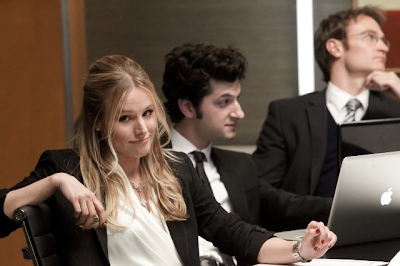 In a recent interview with Kristen Bell, her Hunger Games fangirl status came up, and she talks about her HG-themed birthday party.

It's all I think about.

Anything new in your campaign to be Johanna? Is that still happening?

I mean from my campaign desk here on my full-size bed in a back bedroom in my family's house in Oregon, there are no new developments [Laughs] -- other than the fact that I am trying to stay on top of it and not age too rapidly so that I can still be cast.

For Halloween, were you Katniss?

Oh yeah, it was pretty much major. I had friends that went all out. I have friends that like do it. They do not mess around. I had friends who came as Cato and Clove and were dressed in weird sewn-together fabric leaves and army colors. They had the football black under their eyes and they had taken all the knives in their house, even the butcher knives, and wrapped them in duct tape so they wouldn't be too sharp and flung them over their body like sort of ammo lines. They had all these knives taped to them -- it was amazing. I had a couple Effie Trinkets. It was pretty exceptional. People dressed up like tracker jackers. They were like bumble bees, but with huge horns.

It's all we think about too, Kristen. And man we'd love to have been at that party!

From where we stand, we'd be ecstatic if she had the chance to play Johanna. We're all for celebrities who are fans of the books getting roles, and she has a history of playing sarcastic, kick-ass ladies (Veronica Mars, Fanboys, Heroes, and now House of Lies).

And before anyone gets all uppity about it, there is NO evidence in the books that Johanna Mason is a POC. She may have brown hair, but we've all learned that hair dye is a thing that exists, right?
Posted by Tiffany at 3:37 PM