INT. BUNKER - Who knows what time.

Chapter 11 opens up to everyone stuck in the bunkers while District 13 is hit left and right with missiles. While everyone is stuck for days being orderly, Katniss and our filmmakers will give us some comic relief by showing people what everyone loves best: messing with animals. Our score lets us know that we will definitely seeing "Crazy Cat" aka making a cat look stupid by chasing a ball of light while listening to "Taunting the Cat". Now any cat owner knows how satisfying it is to make your cat try to jump up walls by chasing a laser.

This is my cat Iddy. 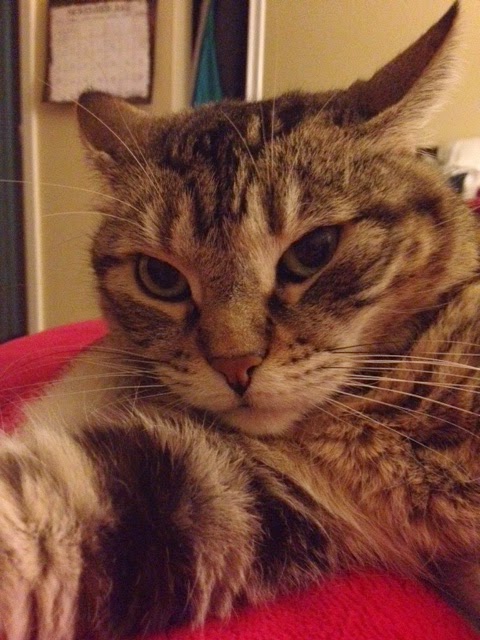 She has the exact opposite temperament as Buttercup. She loves cuddling and strangers. She also gets offended when you laugh at her and refuses to play with the laser that she normally plays with if you have a camera in your hand. So instead of a fun "Crazy Cat" video brought to you on time this week, we will bring it to you as soon as she starts cooperating.

Back to Mockingjay, after all the fun cat shaming times, at night when everyone is sleeping Katniss and Finnick talk about Annie and Peeta and Katniss realizes that she is the Buttercup to President Snow's flashlight holder. She is being taunted and used and is his plaything. Finnick tells her that he wasn't sure about Katniss until they were in the arena and Peeta almost died, causing Katniss to panic. I hope to see this conversation in the film because it really establishes what President Snow is doing and the kind of person he is, not to mention the bonding between Finnick and Katniss.

When the attack is finally over, they are immediately escorted outside to show the world that the Mockingjay is alive and well. Katniss receives a present from President Snow in the form of a bouquet of roses. There is a song on the score called "White Rose" so they might change it to that seeing as that is what we associate the most with President Snow in the films. Katniss comes to the realization that Peeta is being tortured because he is Katniss' weakness as President Snow found out in the Quarter Quell. Katniss has a panic attack because she believes that the Capitol hurting Peeta is her fault. After coming to, they let her know the plan to break out Peeta and the other captives from the Capitol. It is a volunteer mission- one that Gale was the first to sign up for.

Now the score lets us know that the District 8 Hospital is after this scene in the film*, and then is followed by the climax of the movie, but join us here next week for the conclusion to The Mockingjay Part 1 Countdown.

*Assuming the score tracklist is in chronological order.