Donald Sutherland Wrote Gary Ross To Play Snow AND Two New Scenes Will Be in the Film!

Woah! Check out this new Entertainment Weekly article about Donald Sutherland and how he actually petitioned Gary Ross to play Snow AND it inspired Gary Ross to write TWO new scenes in the movie! 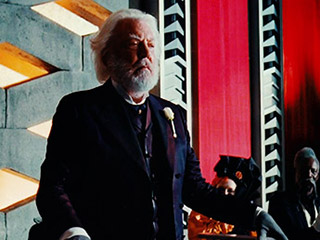 Donald Sutherland isn’t shy: he wrote to director Gary Ross about why he belonged in the Hunger Games cast.  The formidable actor sent Ross an impassioned email about playing the insidious President Coriolanus Snow, the long-standing ruler of author Suzanne Collins’ futuristic world who forces children to fight to their deaths as a way of keeping the masses in line. ”It was a long thoughtful analysis of the way power is wielded and why,” remembers Ross, “how it controls people and what the use of the Games were and how pernicious they were and the way that they were used as an instrument of political control.”
“It was so eloquent and brilliant,” continues Ross, “that it actually inspired me to write two extra scenes for him that I think are pivotal in the movie and that Suzanne really loves.” Ross was already shooting in Asheville, NC when he received the actor’s missive.  While on break he remembers wandering down to a clearing by the edge of a lake to ruminate over Sutherland’s ideas. “So I sat down in this chair and stared at the lake and came up with these two scenes,” he says. “And I realized that not only were the scenes vital but they actually fit a piece that was missing. That was a gift I got from the actor.”
SPOILER ALERT! SPOILER ALERT! In this first installment of the film trilogy, Jennifer Lawrence’s Katniss Everdeen and Sutherland’s Snow really only have one scene together. But Ross says to prepare for a doozy. “It’s only when she’s crowned that they confront one another and it’s very electric.” The Hunger Games hits theaters on March 23.