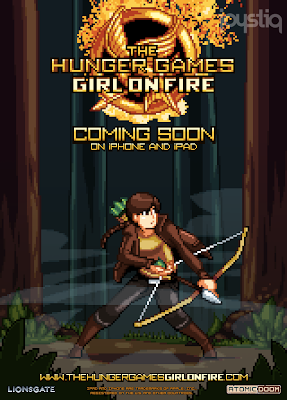 We're a little too excited about this game. Tiffany and I are big gamers, and on the go we are always pulling out our iPhones and iTouches asking each other what the other is playing. We are jumping up in down in our chairs over this game and can't WAIT for this to be released. If you're hungry like us for this game, check out some new behind the scenes details about the game:

It's a different world now, one in which the official tie-in video game for a major motion picture is a game for phones, designed by a tiny team of people best known for games they made without publishers. It's a game with a deliberate retro aesthetic, as you can see in the new "pixel poster" for the upcoming game (visible in full after the break). Author Suzanne Collins even chimed in with suggestions. How on earth did this all happen?

The rise of iOS gaming is a separate, and larger topic, but pinpointing the design of this particular one was much simpler. "From the get-go my inspiration and motivation for this, aesthetically, has been to just pretend I am making a movie tie-in game for the Super Nintendo, only actually fun to play," Saltsman told Joystiq, explaining the look.

"So as far as the setting, and the story, and the things that are in the game, these things are all sourced directly from the film, and by extension the books, and we even got some guidance on specific ideas from Suzanne Collins herself. But visually our inspiration comes from classic Sega Genesis games, especially Treasure games, and even more modern pixel art games like you see coming out of WayForward the last few years."

The use of pixel art helps cement Girl on Fire as a "game," separate from its source material. "I feel like if we're going to make a video game based on a film," he said, "then it shouldn't pretend to be anything else but a video game. Like to me intentionally using a pixelated style of presentation is a maybe not-so-subtle way of saying 'this is its own thing.'" As its own thing, Girl on Fire takes place within the universe of the books, but covers new events.

Read the full article over at Joystiq

The fact that they are trying to emulate the old Sega Genesis and Nintendo aesthetic makes us so excited about this, we can't contain ourselves. If you have an iPhone, iPad, or iTouch, make sure you get this when it releases on March 23rd!