The Hunger Games Teams Up Against Hunger 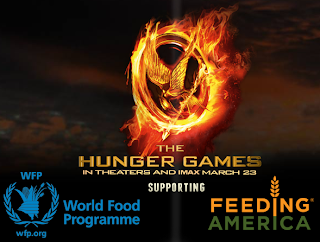 Today, exactly one month before the release of the “The Hunger Games,” the cast and producers are teaming up with the United Nations World Food Programme (WFP) and Feeding America to raise awareness about hunger in the United States and around the world, with a new website and a video public service announcement. The partnership between Lionsgate®, WFP and Feeding America debuted a video spot with the movie’s stars, Jennifer Lawrence, Josh Hutcherson and Liam Helmsworth, that urges fans to help end hunger — what they call “the world’s greatest solvable problem.”

“Unlike the characters in The Hunger Games, we do not live in a country in which food is scarce.  There is enough food to feed everyone living in the US, but it’s not getting to millions of low-income people who need it,” said Vicki Escarra, president and CEO, Feeding America, in the press release issued today.
The amazing community of Hunger Games fans, both in the U.S. and around the world, can now directly help those dealing with real hunger problems of their own. You can get started at wfp.org/hungergames right now by watching the PSA, taking the Hunger Quiz to learn about the extent of the issue, and become active participants on the solution to the world’s real hunger problem.

Check out the rest of the inspiring post HERE

Also check out the official website for this partnership RIGHT HERE where you can donate and do a hunger quiz which will enter you in a contest to win a signed Hunger Games item! Now that's an incentive to be involved!

And of course,  Lionsgate partnering for this great cause wouldn't be without an addition to the Hunger Games Facebook page which you can see HERE
Posted by Welcome to District 12! (Courtney) at 12:02 PM