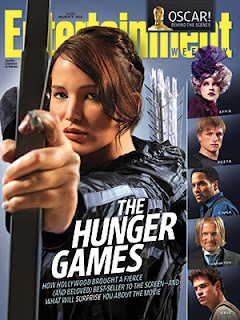 The March 23 release of The Hunger Games is nearly upon us. While we can’t make the clock turn any faster, we can offer fans of Suzanne Collins’ best-selling dystopian trilogy (and newcomers, too) a deep, behind-the-scenes look into the making of the film, from conception to casting, filming to marketing.

Perhaps no bit of casting news was met with greater surprise than Lenny Kravitz taking on the role of Cinna, hero Katniss Everdeen’s deeply cool and compassionate stylist. Kravitz was working on his album, living out of a trailer in the Bahamas and oblivious to the Hunger Games phenomenon, when Ross first approached him to offer him the part. The director had been moved by the musician’s gentle grace in Precious and was further intrigued by the fact that Kravitz already felt a nurturing bond with star Jennifer Lawrence, who had become close friends with his daughter Zoe during the filming of X-Men: First Class. “I love that girl,” says Kravitz. “The minute I met her she became a part of the family.”

It took one sleepless night of reading a downloaded version of The Hunger Games in his trailer for Kravitz to commit. But Woody Harrelson, who initially turned down the role of Katniss and Peeta’s sodden wreck of a mentor Haymitch, was a harder sell. “Listen, I’m nuts,” he explains. “It was just a stupid thing where I hadn’t read the books yet. I didn’t see that there was enough for me to do in the script. But then Gary called me back and said ‘You got to do this, I don’t have a second choice for the role.’ And of course flattery always gets the best of me so I read the books and really saw the depths of this guy. Holy s—, I would have been bummed to miss this.”


Pick this issue up on March 2nd to find out what's NOT in the movie too!