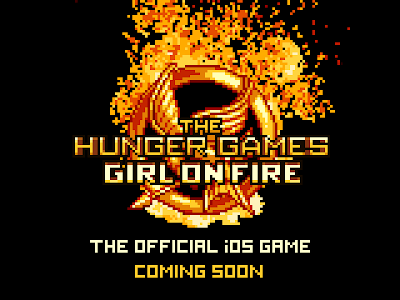 Today TheCapitolPN Twitter retweeted this blog post about an upcoming Hunger Games game that will become available for iPhones, iPod Touches, and iPads.


And so, I am happy to announce that I am collaborating with Lionsgate and a kind of indie dream-team to make The Hunger Games: Girl on Fire for iOS. Mark Johns (Tap Tap Dance) and Kevin Coulton, the minds behind Doomlaser (Hot Throttle, Space Barnacle), are fleshing out the design while they program the game from scratch. Paul Veer (Super Crate Box, Serious Sam: The Random Encounter) is the lead artist and animator. Daniel Baranowsky (Canabalt, Super Meat Boy) is composing an original soundtrack inspired by the film. Ozone Sound & Music (Max and Al's Heavy-Duty) are handling the sound effects, and the one and only Kert Gartner (Winnitron) will be putting together our launch trailer. It is a genuine honor to get to work alongside these fantastic people, and this project would not be possible without them.
The Hunger Games: Girl on Fire is coming soon to your iPhone, iPod Touch and iPad, timed to theatrical release.

Too cool for school! You may not know this, but Tiffany & I are huge gamers. When it comes to me in particular, I have a very soft spot for 8-bit and 16-bit old school graphics. You can imagine how psyched I am about this by just seeing the title treatment.

Just a short while ago, TheCapitolPN also directed followers to the facebook app for the game:
Check out the description of the game:

Really nice to know this won't be taking place in the arena, as that would a little messed up for a video game.