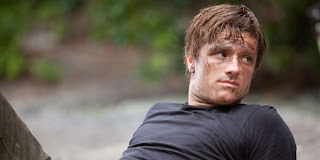 Did you read the books before you got the script?
With these books I read them when I heard they were making the movies, as I hadn't heard of them until that point. I found out they were wildly popular among all ages. I read the whole series in a week, and I couldn't put it down. As soon as you finish each book you have to pick up the next one or you'll go crazy! It's like crack! I read so many scripts - that's my main literature that I read. When I'm not reading scripts I like to read books about psychology and sociology and non-fiction.

How involved was Suzanne Collins in the making of the film?
She was very involved. It was great actually, as she was in the first audition that I had, which was mildly traumatising. To walk into the room and see the author of the book! She gave me a call when I got the part, saying 'if there's anything you need, here's my cell phone, my home number, my email, just let me know'. She's so sweet and she was on set a bunch. It was great to have her there, as it felt it gave the fans a sense of calm to know they weren't just giving it to Hollywood to make whatever version they want. She was great at making us not feel intimidated, she was aware of it. She knows we are actors who make our own interpretation of it, said she can't wait to see what we do with it. Like, excited to see it move into the next medium. She was on board to make little adjustments to make it the best movie possible. She offered herself up for any questions, but the [character] was all in the books. I've never read a character in my life who I've felt was so much who I am as a person, and stood for the same things I stood for. When I was reading it, I thought how has Suzanne written a book that is who I am. Everything about Peeta I believe in 100%.

If you were entered into the Games, how good would you be at surviving?
I'm a modest person, I swear to God, but I think I'd be really good in The Hunger Games, as I'm a very outdoorsy person. I love the wilderness, I grew up playing in the woods, camping and hiking. I'm fast, I play sports, I've done fighting training - I think I'll be all right! I might have a good chance of survival. My downfall would be the Careers, who are trained to kill. They have a disconnect when it comes to killing people, so that would be my biggest problem. I would try to survive as long as possible without having that face-to-face conflict.

How was the atmosphere on set, with all the fellow tributes?
It was great. One of my favourite things about acting is getting to interact with really cool people. Everyone they cast in the movie I love so much. The tributes were incredible. It was strange to go from a scene where you have to be terrified of them, and then be hey, what's up, high five, let's go get some lunch.

Did fans of the book show up on the set of The Hunger Games?
Lionsgate were so tight when it came to security on location. When we walked from our trailers to set, or to our cars, they built like barricades so people couldn't see the costumes. One time we were in North Carolina, and it was the weekend, and I got into the hotel lobby and there were two girls who had driven nine hours on the chance I would be there. They had a bunch of stuff for me to sign and everything. They have their ways! All that pressure was washed away as soon as I got on set as I started acting, and doing what I loved. When I was in in New York City for the premiere release of the trailer on Good Morning America, one of the fans had made me a hand-knitted scarf, and gave it to me out of nowhere. It was one of the nicest things a fan has ever given me, for free!

Can you remember when you first realised you wanted to be an actor?
I honestly dreaded doing school plays. I hated it so much, not because I had stage fright, but because I thought the subjects were cheesy. They were like 1950s shoo-bop showaddy waddy and it made me mad. One time I was doing a grandparents day show at elementary school when I was probably eight years old. They wanted me to sing these horrible '50s songs, and I was okay, fine I'll just go up there and mouth the words 'watermelon' over and over again and pretend you're singing. So I went up there and mouthed 'watermelon, watermelon, watermelon' all angry and pissed off. Afterwards, my grandmother came up and asked 'were you singing watermelon up there?' I loved entertaining people and my family, but I never wanted to do it in a school play. My first movie was Miracle Dogs for Animal Planet, which was about these dogs who could lick people and heal them. I loved doing it, and thought, if they keep on hiring me, I'll keep on doing this. They have, thankfully.

Read the rest of the article HERE

TOO COOL that Josh mentions DWTC people Mary & Flo meeting Josh during production and Shylah giving him her scarf!!

Source: DIY via @JediShywalker
Posted by Welcome to District 12! (Courtney) at 1:37 PM