Katniss Fever! Yet Another EW Cover! 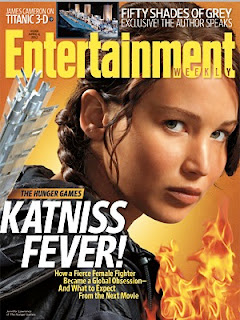 Last weekend the first film adaptation of Suzanne Collins’ bestselling book series about dystopian teenage blood-sport massacred the competition at the box office, raking in an astronomical $152.5 million and taking its place as the third biggest opening weekend of all time. Jennifer Lawrence’s headstrong heroine Katniss Everdeen shot her way into the hearts and wallets of moviegoers the world over, as well as onto our newsstand cover.


Even the folks who were banking on The Hunger Games being a success were shocked by how many fans and not-yet-fans alike crammed into multiplex seats to watch Katniss fight for her life. “This has exploded beyond anything we could have imagined,” says director Gary Ross. “There are days where it feels like we’re in the middle of some national media event that has nothing to do with entertainment. We keep looking around trying to figure out how this could have actually happened.” Lionsgate is aiming to release the sequel, Catching Fire, around Thanksgiving 2013, but everyone will be returning to work much sooner. “It’s fantastic to finally have the movie out in the world and to see all of these people who love it,” says producer Nina Jacobson, who first picked up the rights to Collins’ novel back in 2009, “but at the end of the day we’ll roll up our sleeves and it’s on to the next one.”