Welcome To District 12 Reacts to The Movie 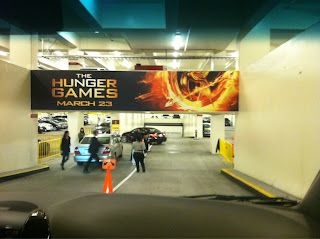 Well, an exciting day it was not just for us, but for another member of our team, dare I say more exciting? While Tiffany and I (Courtney) were busy getting the Capitol treatment, Welcome To District 12 correspondent and new staffer Denise was lucky enough to be in the red carpet fan area (she camped out!) along with a very good friend of ours Aldrin, the District 2 mayor. Check out all of our initial reactions on the movie we have waited so long to see. Yes, we even got Aldrin's reaction too!


Courtney: I had super high expectations for this film, and if it was even possible, it was 1000 times better. Gary Ross hit this baby right out of the park and I am so looking forward to the general public's reaction to this one. This adaptation is so beautiful and breathtaking, yet not as Hollywood as one might expect. It feels almost...independent. You can feel the soul of these books translated to film quite well.

Having said that, the film has a realistic way of translating mediums. Clearly in a film, not every scene can be present, but I think people will be surprised at just how many minute details of the scenes in the books did not get lost in translation. In addition, the caliber of acting almost makes up for the few missing parts that exist entirely. In fact, the same can be said about the costumes, makeup, set design, and score. Everything co-exists together to tell the true themes and essence of the story.

So Hunger Games fans, be prepared to feel what it's like to be at a reaping and a tribute at the Cornucopia, and for goodness sake bring your tissues.

Tiffany: After having seen The Hunger Games movie, I feel like I have a new favorite movie. It took this story that I love and hold near and dear to my heart, and not only stuck to the books as closely as possible, but enriched it with new scenes that were such genius additions. Did it have every scene and line from the books? No. But it was so close that any minor differences were forgivable. Not everything translates from book to movie and what was done to bridge that gap far exceeded my expectations. The extra scenes were a real treat to see; they were necessary and helped show the bigger picture. Knowing that Suzanne Collins had a hand in creating those scenes gives such insight to the books, filling in the blanks where Katniss' point of view was limited.

As someone who has read the book many times, it's hard to imagine a person going into the movie without any prior knowledge of the story and this world. But I feel as if those that have read the books would not feel bored with the way essential information is presented to help non-readers along since it was all done so creatively, all the while helping the movie stand well on its own. This is how a book adaptation should be done.

The cast was perfect. There was not a weak link, and each actor was so masterfully chosen. Even actors from whom I may not have expected so much delivered outstanding performances. These actors know their characters and are them.

This movie is heartbreaking, intense, suspenseful, beautiful, emotional and even funny where comic relief is needed. I cried well throughout the movie, and it meant the world to me to finally get to see this book that I love come to life. As devastating as it is, I want to watch it over and over again, and I can't wait for everyone to get to see it too.

Denise: I was blown away with how well they stuck to the books. They cut out
stuff that was unnecessary to the general plot and added things that
enriched the story. Overall, it’s probably up there with the Lord of the Rings
movies as an adaptation. The costumes were beyond incredible. The
complete contrast of the look and feel of District 12 and The Capitol
will blow your mind. The terror of being reaped and the horror of
being in The Games was real without being graphic. Every single cast
member added to his or her role in the best way possible. The way they
kept most of the movie in Katniss’ point of view (other than key
scenes which showed why certain things happened in The Games
themselves) was a great adaptation of the first person point of view
the books had. And Effie’s comments added much needed comic relief to
the film that helped seeing as I cried throughout the entire film. I
was beyond satisfied with the end result and I cannot wait to see it
again.

Tip: Bring tissues and please don't ruin anyone else's experiences by
talking during the film.


Aldrin: What to say about The Hunger Games movie other than “WOW?” After being able to process everything since seeing the movie just about 24 hours ago, I can honestly say that this movie is one that will not be easy to forget, if forgetting it were even at all possible. The people behind the film wouldn’t stop saying that it stays true to the overall message of the book, and after seeing the movie, they couldn’t have been more correct.

One thing that really surprised me was the acting. Many of us already know that Jennifer Lawrence is great at what she does and expect a stellar performance from her as Katniss. I can confirm that she delivered. For me, someone that really impressed me was Willow Shields. I had not known about her until she got cast, so I had doubts when she was announced to play Prim. But from the very first scene she appeared in, I could already feel that they selected the right girl. Alexander Ludwig also impressed me with his performance as Cato, particularly one scene that I won’t mention, but everyone will know once they see the movie.

There are so many more things I could talk about, but I’ll end with something general. Seeing as this was based off a book, I must admit there were times where I was more focused on finding out what has been changed in the translation from book to film. This is inevitable. There were things in the book I was sad didn’t make it to the movie. However, one thing that makes The Hunger Games movie special is that none of the changes truly harmed the film. In fact, most of the time when I spotted a change, I immediately figured out why. So often with adaptations, things can be changed so drastically that it feels like it’s an entirely different story. This is not true for The Hunger Games. It’s pretty clear that everything about this movie was well thought out, and it couldn’t have been placed in better hands than the people that worked on it. I already can’t wait to see it again!

Stay tuned for our full review in the upcoming week!
Posted by Welcome to District 12! (Courtney) at 9:00 AM