While we probably won't post every review that comes out, I got a little emotional reading this, and I happen to agree with it (except for the part about the commentary which I liked). It's nice to see critics appreciate it as a movie.

(Some spoilers, especially about what the opening scenes are) 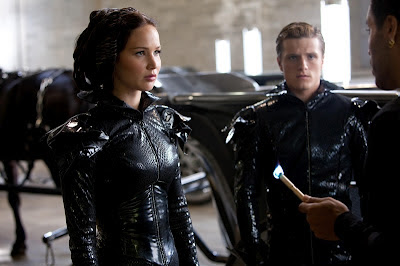 Plot
In a future version of North America a small, wealthy city rules over the rest of the impoverished nation. Every year, a number of the country’s youngest inhabitants are randomly selected to fight to the death in The Hunger Games. This year, Katniss Everdeen (Lawrence) will change the game.

Review
Probably the greatest achievement of The Hunger Games, and there are many, is that in adapting a phenomenally successful teen novel its creative team have produced something that works as a film, not just as an adaptation of a book. There’s no required reading before entering the cinema in order to ‘get it’, and it’s well above the ‘all your favourite bits but with pictures’ business that has become the accepted standard. When a series has sold millions of copies, as Suzanne Collins’ trilogy has, the default position is to produce something that will look just as readers imagined, to show what we were all thinking, rather than offer something nobody had considered. The Hunger Games as a novel has been dissected, expanded and retooled into something intelligent, immersive and powerfully current.

The world of Panem, a futuristic America, is established elegantly in about 90 seconds. First we see two men discussing an event called The Hunger Games in front of an audience; both men evidently so luxuriating in time and money that they can tint and trim every inch of their surface until they resemble painted couture clowns. Then, with a literal scream, we cut to District 12, where all is grey and people dress like the cast of a regional stage production of Little House On The Prairie. This is how Panem is divided. There are the haves and the have-nots. The haves live in The Capitol, amid great wealth and power. The have-nots live in a series of impoverished districts, put under oppressive rule after a failed uprising some time in the indefinite past. Each year two of every district’s youngest members are selected to battle to the death in an arena, from which one will emerge victorious for... no real reason. The poor will do as they are told, however senseless, and the rich will keep on keeping on. The echoes of the 99%ers are clear and not unintended.

This world bleeds with a cruelty from which director Gary Ross never retreats. Even luxury is portrayed as almost oppressive — gluttonous and requiring constant effort. Our heroine, Katniss Everdeen (Jennifer Lawrence), is introduced hunting a cute little deer — typically movie shorthand for a complete monster. She has no time for being wistful because she has to survive. This runs right through the film: what is survival worth? Lawrence is perfect as Katniss. There’s very little softness about her, more a melancholy determination that good must be done even if that requires bad things. She stretches many of the tightly anguished muscles built in Winter’s Bone — the District 12 scenes have a similar hard-bitten feel — plus some other more traditionally gym-honed ones.

The violence and cruelty is most explicit in the Hunger Games arena, a vast, synthetic forest where 24 children hunt each other, and the level of brutality is very smartly done. You don’t get a rating suitable for a teenage audience by gutting preteens or decorating the landscape with their blood. So Ross cuts around it. The constantly searching, handheld camerawork used throughout the film comes in most useful during moments of violence, flashing round the action and making you think you’ve seen everything without ever really clocking anything that would upset your appetite.

It’s an old trick but a very effective one. The only clumsy element of these scenes is an intermittent commentary provided by Stanley Tucci and Toby Jones, which fills in incidental story details in a brash ‘Basil Exposition’ way. When it pops up, it kills the momentum.

Arguably more interesting than the cruelty within the arena is that going on outside, which is almost entirely of the film’s invention. Unlike in the book, we see The Capital’s Gamemakers pulling the strings, despatching contestants with casual stage directions. It’s all played with a cold, even hand, chilling in its absolute lack of concern for consequence. It’s these moments that linger after the film has finished because it doesn’t seem quite so very removed from reality. If this were real, it slyly asks, would you watch it? Well, would you?

Verdict
As thrilling and smart as it is terrifying. There have been a number of big-gun literary series brought to screen over the past decade. This slays them all.

Source
Posted by Tiffany at 3:08 PM