The LA Times interviewed Jennifer Lawrence. She talks about the consequences of fame, what school was like for her and her career. No lie, I found myself tearing up a little. 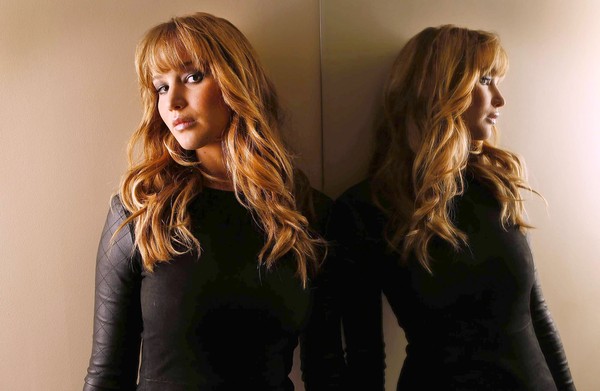 Jennifer Lawrence is relishing her last few weeks of anonymity. The 21-year-old actress understands that her starring turn in"The Hunger Games" is about to change her life. Opening Friday, the highly anticipated film, faithfully adapted from Suzanne Collins' bestselling young adult novels, promises to transform Lawrence into one of the most famous movie stars on the planet.

Some things already have changed for Lawrence. Just a few weeks ago, paparazzi began hiding in the bushes around her house, and a chauffeured SUV temporarily has replaced her Volkswagen. When she arrives at a Beverly Hills restaurant for an interview, though, it's a tabloid-invented rivalry between herself and "Twilight"star Kristen Stewart that's upset Lawrence far more than the idea that she soon won't be able to go to the grocery store without causing a ruckus.

"Things like this tabloid war shouldn't stress me out, but it's kind of like being in high school when one friend says you said something bad about your other friend and you know you didn't say anything. It gives you a knot in your stomach," said Lawrence, nibbling at a bread roll. "I'm afraid that's what it's always going to be like."

"I always felt dumber than everybody else," she said, recalling an incident in which a math teacher embarrassed her in a class when she kept asking questions because she didn't understand the material. "I hated it. I hated being inside. I hated being behind a desk. School just kind of killed me."

Lawrence's perspective changed during a trip to New York with her mother. It's a story that seems impossible today — one that happened only to pretty, young girls in a bygone era, before fame was a top career choice for teenagers. A talent agency photographer snapped Lawrence's picture, and that photo landed her a few auditions and meetings with agents during her short stay.

"I remember being in New York, reading a script and I completely understood it. I knew I could do it," she said. "They were offering me contracts on the spot and telling my mom I was good. I was finally hearing I was good at something. I didn't want to give up on that."

Read the full article here at the source. It's a really great read.