The Hunger Games Grosses Over $68 Million Its Opening Day 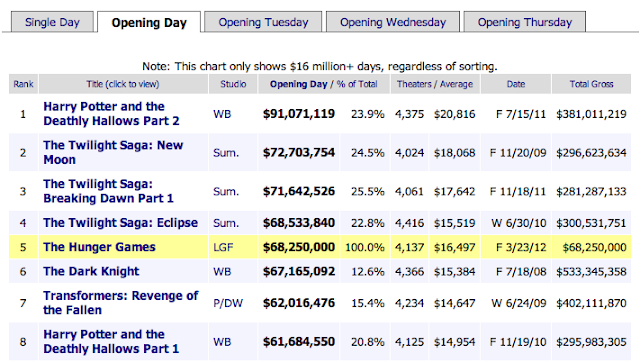 The numbers are out! The Hunger Games has grossed over $68 million domestically its opening day!


The feast is on: “The Hunger Games” has taken in $68.25 million domestically in its first day, a record for a non-sequel.

The Friday total for Lionsgate’s “The Hunger Games” was the fifth-best opening day ever and puts the movie on track for the best debut weekend ever in March. That record is held by “Alice in Wonderland” with $116.1 million.

The big start should translate into an opening weekend of as much as $140 million domestically, according to Paul Dergarabedian, analyst for box-office tracker Hollywood.com.

The weekend isn't over yet, so we're expecting more records broken! This is beyond amazing for Lionsgate and The Hunger Games, as it ensure that this movie is a hit and is good news for the future of this franchise.