A couple weeks ago, I (Tiffany) was invited by Lionsgate to participate in a fansite “roundtable” interview with none other than our Boy with the Bread Josh Hutcherson! He was incredibly sweet when he came on, asking us how we were and thanking us for all we’ve been doing. He made sure that we knew that what the fansites do does not go unnoticed. 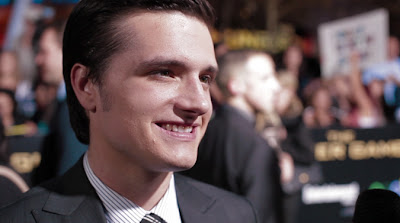 Each fansite representative that participated got to ask one question, so I made sure mine was a good one, especially since I was representing both Welcome to District 12 AND Victor's Village!

If President Snow forced you onto a present day reality show, but you could pick which one, what show would you choose and why?

So what was his answer? 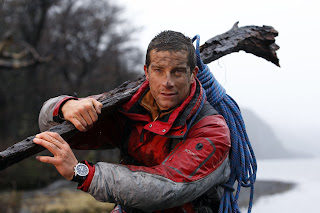 Well, he made sure to mention that he doesn’t watch much reality TV (I don’t know about that, we know he likes the show Gigolos), but ultimately he said Man vs. Wild, since he likes host Bear Grylls and thinks he could learn some great survival skills if he were on the show. Also, he said maybe Jersey Shore. Not so that he could participate in T-Shirt Time, but to maybe “talk some sense” into everyone on the show. How very Peeta of him!

So what else was asked? Questions ranged from hypothetical to personal to insights into shooting the movie.

Shylah from Down with the Capitol asked what his own token would be as well as Peeta’s. His would be a bone from his grandma’s fried chicken, which is apparently the best (we’d like to try it someday!), and since Peeta doesn’t have a great relationship with his immediate family, he thought maybe something from a grandparent, like a pendant.

HungerGamesTrilogy.net asked Josh what crazy Capitol fashion trend would he start, and he answered with mohawks, and he likes tank tops but that’s not really crazy.

In keeping with the whole fansite idea of the roundtable interview, Savanna from HG Fireside Chat asked Josh what fansite he would start. As an avid basketball fan, he said that he would start a University of Kentucky basketball website since he follows them really closely and knows all the players’ stats.

MyHungerGames.com asked about how it feels seeing his face plastered on everything, from magazines to even pillowcases.  He assures us that it’s something a person does not expect to happen in his lifetime. His friends send him pictures of him on magazines and it’s mildly embarrassing and slightly traumatizing. But also for him it’s reassuring to know that there is this level of excitement for the movie and his character. How very down-to-earth!

TheHungerGamesMovies.net asked about Josh’s return to Twitter, and he explained that he was in London and Paris and wanted to share it, but he’s a little cautious about Twitter since he thinks it can be abused. When he tweets he gets hundreds of responses and he still feels new to it.

Kimmy from Mockingjay.net asked about the stunts, and Josh said that the craziest was the final showdown with Cato, Katniss and Peeta on the Cornucopia. It took 3 nights to shoot and involved lots of intense choreography.

HG Girl On Fire asked what was most important in bringing his character to life, to which Josh told us about telling Suzanne Collins when coming into the audition that he felt so much like Peeta and wondered how she made a character that was based on him. He assured us that he had never done that before and would’ve never done anything like it, but he felt that strongly about it.

The Hob asked, “What scene did you find the most challenging and did it result in any changes?”, to which Josh replied with his usual cave scenes answer, but elaborated on it, revealing that they were shot in one day and that Gary, Suzanne and him decided to give Peeta “a little more backbone” than in the books, but he’s confident any difference wouldn’t be so noticeable.

When HungerGamesMovie.org asked what the most technically difficult thing about shooting the movie was, Josh answered with dealing with the heat, especially during a 5-day hot and humid shoot. The upside to that though was that he felt it added a real element, adding to the scene’s inherent intensity.

And the last question asked was “Which scene caused the most injuries?” from SparksWillFly.org, to which Josh explained how Jennifer Lawrence gave him a concussion in between filming a scene that shouldn’t have given an injury.

Overall it was a lot of fun being on the same call as so many other fansite runners and of course Mr. Josh Hutcherson! So many of us were so excited and nervous that we were shaking (yes, me included!).

What did you think of our question? We’d like to hear your answer too!

If President Snow forced you onto a present day reality show, but you could pick which one, what show would YOU choose and why?


For what it was like getting to ask Josh a question, check out my Victor's Village post here.
Posted by Tiffany at 10:01 AM