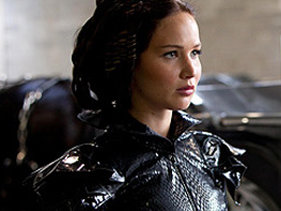 
MTV: How much did you know about "The Hunger Games" before Gary Ross came calling?
Judianna Makovsky: I had not read them, I have to admit. I hadn't even heard of them. But Gary Ross had called me, and his kids loved them, and he said, "I really want to do this movie." I was on another movie set in Shreveport, Louisiana. He said, "You have to go get it," and I said, "It's 10 o'clock at night." He said, "You have to get it first thing in the morning. You have to read it." I'm like, "OK." And then I was sending him images every day so he could start thinking. They were talking to several directors, and he really wanted to do it. It was great to start that early with him — trying to find images that were useful to him.
MTV: I have to imagine reading the series and Suzanne Collins' vivid descriptions were an evocative experience for an artist like you.
Makovsky: I have to say, I try to read everything like a fan, but I also read it as a costume designer, and I go, "Oh my god. How do you do that?" Also, I was lucky enough to have a meeting with Suzanne, and a lot of things that are in the written word do not translate well to film. Lucky for me, she understood that and knew that and said, "Do what you need to do. If you think it's not going to translate, I understand." And she was great about it.
MTV: Did you show her any of your drawings?
Makovsky: At that point, if was fairly early. We had very few. We had already done mood boards for the districts and where we wanted to go. And, yes, she was there for that and loved all of that. It was great.
MTV: What were your initial discussions with Gary Ross like?
Makovsky: The initial discussions always start with character. I would say on this movie, we started with the world that they were going to live in. Philip Messina is the production designer. I've worked with him before; we're a great team. Gary, Phil and I all sat down and just talked about what this world was going to be, and how do you have District 12 — how does that reflect in the Capitol? Because it is all the same planet, it is all the same time period. So they have to make sense together ... Before Gary got the job, we sent him all these images of coal-mining towns and all these things. He picked up some of them and just went, "This is it. This isn't a period movie, but I want the feel of these photographs." So it was basically a discussion about the world they lived in, and then we started talking about individual characters.


Read the rest of the article over at MTV