How much did it take to market The Hunger Games? Oh, only $45 million. 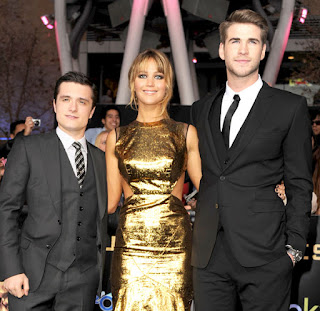 From the LA Times:


Lionsgate is launching its biggest ever marketing campaign for "The Hunger Games," but still not outspending Hollywood's major studios.

To promote its biggest budget production yet, the Santa Monica-based studio is spending about $45 million to advertise the picture in the U.S., according to people familiar with the matter but not authorized to speak publicly.


Lionsgate typically devotes less than $30 million to selling its nationwide releases, which are often targeted genre films such as "Saw" and Tyler Perry's comedies, though it did spend $40 million to market the 2010 hit "The Expendables."


Hollywood's major studios can spend as much as $70 million to $80 million marketing their most expensive event movies domestically.

Lionsgate has the advantage, of course, of huge built-in awareness for "The Hunger Games." The trilogy of books by Suzanne Collins on which the film is based have already sold 23.5 million copies worldwide.

As a result, the studio has not only been able to afford a more cost-effective advertising campaign, but is able to get away with not showing any footage in commercials and trailers from the actual hunger games, in which teenagers hunt each other to the death in front of a televised audience.

Lionsgate's marketing strategy appears to be working spectacularly well. Pre-release surveys suggest that "The Hunger Games" will have an opening weekend of more than $100 million when it debuts across the country on March 23.

Also check out this interesting article from the New York Times on the specific strategies that Lionsgate employed and what their thinking was on developing the marketing for this movie.

Selling a movie used to be a snap. You printed a poster, ran trailers in theaters and carpet-bombed NBC’s Thursday night lineup with ads.

Today, that kind of campaign would get a movie marketer fired. The dark art of movie promotion increasingly lives on the Web, where studios are playing a wilier game, using social media and a blizzard of other inexpensive yet effective online techniques to pull off what may be the marketer’s ultimate trick: persuading fans to persuade each other.
The art lies in allowing fans to feel as if they are discovering a film, but in truth Hollywood’s new promotional paradigm involves a digital hard sell in which little is left to chance — as becomes apparent in a rare step-by-step tour through the timetable and techniques used by Lionsgate to assure that “The Hunger Games” becomes a box office phenomenon when it opens on Friday.

While some studios have halted once-standard marketing steps like newspaper ads, Lionsgate used all the usual old-media tricks — giving away 80,000 posters, securing almost 50 magazine cover stories, advertising on 3,000 billboards and bus shelters.
But the campaign’s centerpiece has been a phased, yearlong digital effort built around the content platforms cherished by young audiences: near-constant use of Facebook and Twitter, a YouTube channel, a Tumblr blog, iPhone games and live Yahoo streaming from the premiere.

By carefully lighting online kindling (releasing a fiery logo to movie blogs) and controlling the Internet burn over the course of months (a Facebook contest here, a Twitter scavenger hunt there), Lionsgate’s chief marketing officer, Tim Palen, appears to have created a box office inferno.

Read the rest of the article at the source.

While $45 million is a lot, especially for a studio like Lionsgate, it's actually on the low side when compared to other blockbusters' marketing budget. Lionsgate has used a lot of relatively inexpensive methods to market The Hunger Games.