The Hunger Games Adventures: So Long, Productivity! PLUS -- CHANCE TO WIN CODES! 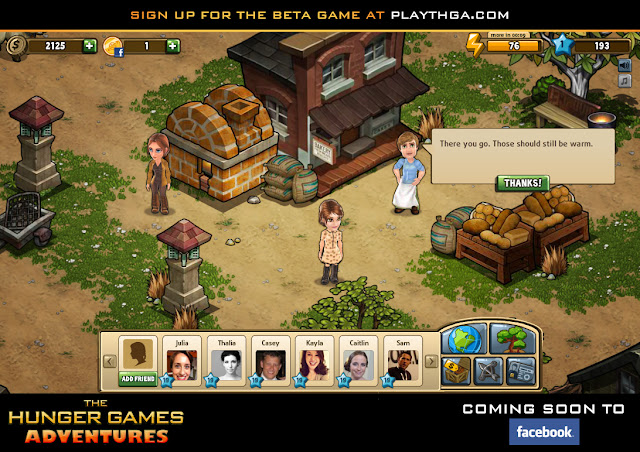 What would happen if Sim Social on Facebook and The Hunger Games had a virtual baby? Well, behold, The Hunger Games Adventures. Being huge gamers, we were so honored and lucky to test this baby out. Needless to say it's been our priority this past week. Hunger Games Adventures is a Facebook game (currently in Beta) in which you explore District 12 and complete quests. The game will also take you to different districts around Panem and we'll get our first look of a real map of Panem. Unfortunately, the version we played did not have this aspect up and running, but we did get to run around all parts, inside and outside of District 12's fence.

Tiff: In the last couple of years, I had to cut myself off from Facebook games because I just get too addicted to them. But when I found out that there was going to be a Hunger Games Facebook game, I knew I'd have to end my embargo.

The format of the game is very much in line with a lot of Facebook games like Farmville. You buy items using "goods" as your currency. Sometimes you need extra items to "finish" them before you can utilize the item. And after they've been used, you must wait a certain amount of time before you can use it again.

It's tricky making a game out of The Hunger Games so keeping it in District 12 is smart. Also most of the quests are based on helping people. Even when trying to get rid of frightening creatures, you don't kill; you "banish" them.

Truthfully, I'm addicted to this game. I can't wait to see more of what this game has to offer.

Courtney: I was dangerously addicted in the first five minutes. As you meet characters such as Gale, he really conveys to the player the bad conditions in District 12, and how the districts have no choice but to obey. It's nice that they put this in as the tone of the game, so as not to convey there an upbeat mood or happiness to the situation. Still, you are put in the mindset of that world. Chores need to be done, snares need to be set, and people need to be saved.


That being said, the gameplay is EASY. Anyone can play this game, no particular skill is needed. It's pretty neat to be able to decorate your "Forest Escape", not with superfluous items, but things like snares, archery targets, strawberry bushes, or even primroses. Furthermore, the more goods you acquire (think Farmville logistics), the more you can expand your forest escape, revealing new squares of land that might hold a mysterious crate to open.


Keep in mind, all this is in the setting of District 12. We haven't even discovered what the map of Panem's function will be, or what other specific locations we might be able to explore. The quests in District 12 are pretty entertaining enough. I think what fans will enjoy most, is to travel to other parts of District 12 that you don't find out about until Catching Fire. It was nice to see these locations that aren't necessarily in the new movie.


We give this game a MUST PLAY, if even for a little bit, for those who aren't the game playing type. We finished the demo for the storyline, but if it says anything at all, Tiff and I are STILL playing!

Hey-- WE'RE NOT DONE YET! Scroll down for a giveaway!! 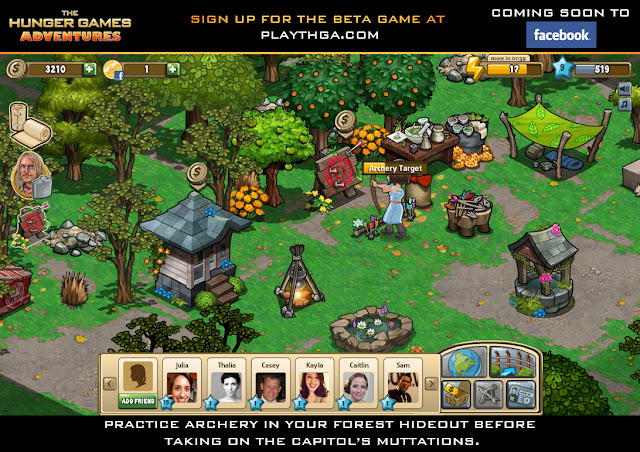 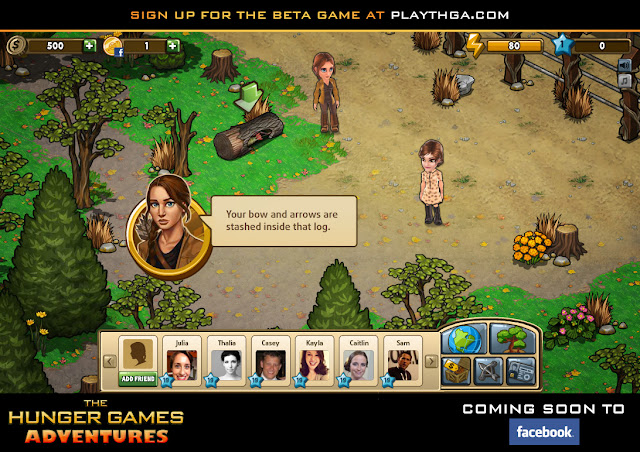 Check it out! We have FIVE codes that we are giving away to gain early access to The Hunger Games Adventures! Fill out the form below, and may the odds be EVER in your favor...

THE CONTEST IS NOW CLOSED!
Thank you for entering! Stay tuned to find out who the winners are!
Posted by Welcome to District 12! (Courtney) at 10:00 AM