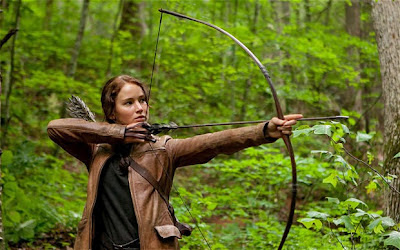 Moviefone asked fans what they are waiting to see in the movie! Here's the list:


1. The Opening Shots
"In film adaptations, I'm always so interested in the way they introduce the set and all the people -- there just seems to be so much energy and excitement in those first few minutes." – Emily Eskelsen

2. The Reaping
"When Katniss volunteers for Prim, and the Rue's Flowers scene!" –- Wendy Raver

3. You're Great!
"One of my favorite scenes in the book is rather small, but it shows how much Katniss and Peeta have taken notice of each other over the years. It's when Haymitch asks if they have any skills, and they're both rather modest and then start spouting off how talented and strong the other is. It's a sweet moment I hope they show in the movie." -– Isabella A.

4. Capitol Creatures
"I'm dying to see the muttations. A little scared, but still want to see them. Tracker jackers and mockingjays too. All the fantasy stuff. Oh and Woody Harrelson as Haymitch!" –- Julie Flory

5. Faithful to the Source
"First, I really want to know when they play the new song by Taylor Swift. I am hoping it is when she is placing the flowers on Rue, but probably not. I really hope they can bring to life all the cool things Collins wrote, like the dress and the characters. I want to see Peeta buried in the mud when Katniss finds him. Okay, I want it all. I really hope it stays mostly true to the book." -– Tricia Scharnberger

6. Forever Friends
"I love Gale, so I can't wait to see him and Katniss interact in the opening hunting scene and later their big emotional goodbye after Katniss volunteers for the Games. I'm prepared to cry." -- S. Lee

7. Sweet Memory
"However Katniss remembers or tells the story about 'The Boy with the Bread.'" -– Rocky Hadidi

8 Woody for the Win
"Anything with Woody as Haymitch. I think that may have been the most perfectly cast part in the movie." -– Amy Oztan

9. Romancing the Stone
"I'm a romantic, so I can't wait to see Peeta and Katniss in the cave. I really hope they keep the 'You don't have much competition anywhere.' My shipper heart will melt!!" –- Jenn Montes

Bonus Moment!
11. Just the Two of Us
"Basically I want all the Katniss and Peeta stuff. Besides the only kiss that makes Katniss want another, I can't wait to see the pivotal berries scene toward the end, and the big moments involving Caesar Flickerman, like Peeta's pre-Games revelation about Katniss and their post-Games reunion on his show." –- Nicky Lewis

What scene are you dying to see?

Source
Posted by Tiffany at 7:03 PM