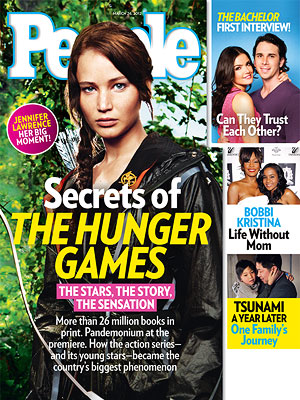 Make sure to check out The Hunger Games on the cover of People (different from the Collector's Edition) on newsstands Friday!

After months of anticipation, endless fan discussion and a pandemonium-producing premiere, the first Hunger Games film is finally arriving in theaters on March 23. The fans are ready – but are the stars?

The 21-year-old actress also shares how she bonded off-set in North Carolina with leading men Josh Hutcherson, 19, and Liam Hemsworth, 22.

"One day we went down to a creek to catch a crawdad, 'cause Liam didn't know what it was," recalls Lawrence. "I saw one and was like, 'Catch it!' Josh did and it got stuck to his hand. It was a leech! Then we went to Walmart and bought slingshots."

Adds Lawrence, who also spent time with her cast mates listening to costar Lenny Kravitz play music back at their hotel: "It was like some weird summer camp."

For much more on The Hunger Games, including behind-the-scenes stories from the stars, Effie's outrageous wardrobe and fan reaction, pick up this week’s PEOPLE, on newsstands Friday.

Can't wait to get our hands on it!

Source
Posted by Tiffany at 3:55 PM