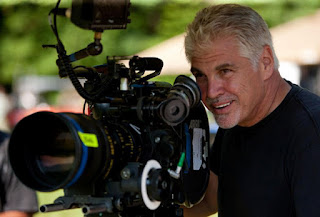 The SFX issue with Gary Ross's interview is out now but some of the Q&A is online. Here have a snippet!


SFX: You’ve done the book-to-screen process before with Seabiscuit but how different an animal was The Hunger Games?

Gary Ross: “I have a much closer relationship with Suzanne (Collins) than I had with [Seabiscuit author] Laura Hillenbrand. In fact, Suzanne and I wrote the last pass of the screenplay together.”

Passionate fans sometimes forget that you can’t do a literal book translation for film, so did you feel the pressure of knowing your screenplay was going to disappoint some purist readers?

Gary Ross: “First of all, I’m a fan, so pleasing myself is half the battle. Obviously the fact that Suzanne loved it instilled in me that I had been properly calibrated and my tonal sense of the material was coming through. In terms of pressure, I don’t know. I felt an excitement and opportunity to dive into something that I love. Anytime you write or direct anything you are also the audience or the reader. You want to give them the same thrill you had when you first read the book.”

From the time the film was announced to when you were actually shooting in North Carolina in the summer of 2011 was very rapid. Were you worried about the window of turnaround time you had to write, shoot and then finish the film for the March 2012 release date?

Gary Ross: “I had a very, very short prep on the movie just because of the release date. More than anything, I think the prep was pretty truncated – post is pretty truncated too – but the shooting was fairly normal. In prep we just worked 18-hour days so we did four months of prep in two months by working double days essentially, so we were able to get ready.”

Read the rest of the interview here, it's very enlightening! He talks about CGI use and casting Lenny Kravitz and Donald Sutherland.
Posted by Tiffany at 5:39 PM