The Hunger Games Mall Tour Kickoff: The Frenzy, The Fans, and Meeting The Cast! 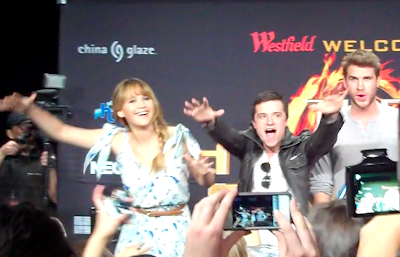 Watch out world! The Hunger Games craze is here!

It was a fun and crazy day yesterday when Welcome To District 12 photographer Denise, esteemed District 2 Mayor Aldrin, and I attended The Hunger Games mall tour kick off at the Century City mall in Los Angeles. Line up was to be at 8 am and the first 100 people were to receive wristbands to meet the cast. Unfortunately, when we got there a little before 8, this was the sight: 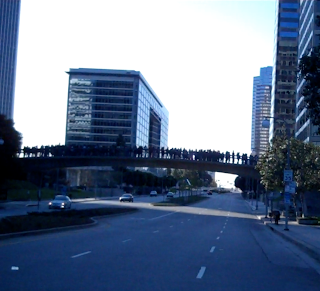 Yup. Apparently over 200 people were already there and yes, the wristbands had long been gone at that point. It was then we realized we were in for a very crazy day. We got in line with Aldrin and waited until we were to be put in the holding area, which would be the fan campground until the Q&A session, which would be taking place around 6 that evening.

Read the rest under the cut to watch some craziness, awesome fans, how I got to meet the cast, the Q&A, and what you might be able to win later this month! 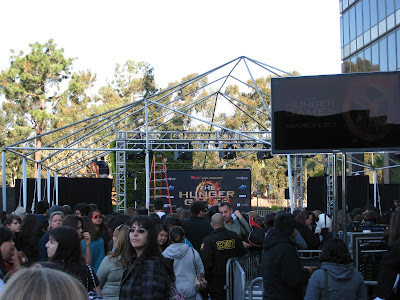 The first part of the day seemed relatively quiet as Hunger Games fans slept on blankets, read Hunger Games books, worked on homework, and chatted with fellow fans. Soon we discovered that they were giving out SUPER COOL Hunger Games mall tour posters with a design we have yet to see! We were all too excited when we finally got our hands on one!


What do you guys think? It's a pretty awesome poster if you ask me. I'm already seeing her as The Mockingjay! But I'm getting ahead of myself. After scoring these beauties, we spotted none other than Whitney from the "I Wanna Go" Hunger Games parody music video!

The day starting getting truly crazy when KIIS FM came and starting giving away meet & greets and throwing Hunger Games swag into the audience. It was around this time that the Hunger Games mania truly set in. Everyone screaming for meet & greets, trying to get the attention of the KIIS FM people, anything for a chance to meet the cast. We sort of stood back and watched the mania happen, astounded at the frenzy for The Hunger Games! I brought my poster tube to hold our free posters as well as the poster we made for The People's Choice awards, in the event we got wristbands and could get it signed. Tiffany and I spent 3 hours on it, and none of the cast ever got to see it. So, it just sat in the poster tube. It was getting closer to 6:15, and suddenly the KIIS FM people requested to see the best signs people made. Denise turns to me with intensity: "GET OUT YOUR SIGN!!" So I thought, "Why not?" and frantically wrestled it out of the poster tube, and entered the crowd frenzy screaming and yelling for them to notice my sign. It was a challenge as we were a bit in the back and I was being hid by everyone else's signs in front of me. They finally came over, pointed at me and told me where to meet the person who would lead me to where I was supposed to go. And then I realized...

I WAS GOING TO MEET JENNIFER, JOSH, & LIAM.

It happened so quickly, and definitely took about 5 to 10 minutes for it all to sink in. There was a line for the meet and greet, so there was ample time for me to feel like I was going to be sick, start visibly trembling and then attempts at pulling myself together. This took place in the Microsoft store, and it was all Hunger Games in there! There was one item in particular I wanted so badly... 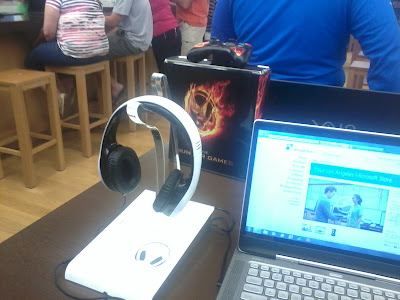 Check it out gamers, a HUNGER GAMES XBOX 360. I had a moment of awe at this fantastic piece of existence before Jennifer, Josh, and Liam entered the room. Naturally when they did, some breathing and a good conversation with myself got my head in the right place to try and act like a normal person.

Unfortunately, I was not allowed to get my poster signed (something I have sworn to myself I would make happen) and was denied any pictures. But how can I complain, really? So basically I thanked Liam for waving to us at the PCAs, told Jennifer how much we love her and that she is utterly hilarious. SHE'S SO BEAUTIFUL! I thanked Josh for the hug at Jimmy Kimmel and told them that everyone is extremely excited that they are playing these roles. My memory was pretty hazy seconds after I met them, because of the nerves and the reaction my body was having to meeting these fantastic people! Maybe if I get a chance to meet them again, hopefully I will be a little more comfortable.

After all that, I was excited and astounded the turn the day had taken. Not only that, but this meant I got to be in the VIP area. So that's right people, that meant a much closer shot for me to take video! YAY! The pit was all die hard fans, which was interesting to see. Everyone was very nice and enjoying the excitement. I was very amused and pleased to find out everyone around me were Tumblr people! Soon, the lights dimmed and the trailer played on the screens.

Watch this video of the entire audience reaction to the trailer. Be warned, this video contains a lot of screaming, squeeing, laughter, cheering, and three finger saluting:

Maybe now you guys can get an idea of this madness. It was crazy, but kind of cool to see how much people love and care about The Hunger Games! Here is our 2 part video of the Q & A session:

While waiting in the VIP area, I spotted one particularly awesome fan who was COMPLETELY decked out in Hunger Games style:

And then it was over! The odds were certainly in my favor yesterday, and a great and crazy day it was.

Okay guys, this should definitely be a clue to you all how the other mall events will go. Yours might be not as crazy, or it could be JUST as crazy, maybe even crazier if that's possible. The Westfield mall said that lining up would not commence until 8 AM that day, but by that time people had already camped out regardless and the wristbands were gone.

BEHAVE YOURSELVES!! Keep in mind the people around you! Watch out for what, more specifically WHO you might be stepping on. Don't push, and respect each other's space. Yes, it's extremely exciting, but occasionally if crowds to get too intense, any cast appearances may not happen at all for you and that would be a horrible shame for you guys.

Respect these wonderful actors! They're people too!

Lastly, please remember that you are representing the Hunger Games fandom. Wouldn't it be nice if despite our numbers, we were known as the well behaved fans? I would hate to see Hunger Games fans, who seem to be so passionate and friendly, get a bad reputation. That would make me a sad panda.

So get out to those malls, be safe, be aware, be courteous, and when it comes to any wristbands, may the odds be ever in your favor.

Check out some other photos too: 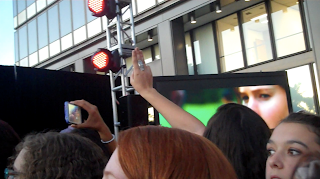 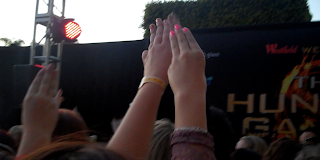 And lastly, I had Tiffany make a gif of this fantastic moment:

ONE LAST THING! Keep an eye out for a GIVEAWAY later on this month!

That's right, we are giving it away: the precious poster signed by Jennifer, Josh, and Liam!

Westfield's coverage of the mall tour kickoff, if you squint REALLY HARD you might see our very own Courtney in the background!